THOU + PORTRAYAL OF GUILT + COOL JERKS

“Guttural doom for this mortal coil: Thou’s quagmire of sludge metal strikes right to your soul. For fans of The Body and cathartically crushing hardcore. ”
Join the Headfirst mailinglist for recommendations.

18+ event.
--
THOU
Thou is a metal band from Baton Rouge, Louisiana. Though oftentimes misread as “post rock” or “hipster doom” or lumped in with the Southern sludge, Black Sabbath-worship of New Orleans, Metairie, and Houma bands like Eyehategod, Crowbar, or Acid Bath – they share a more spiritual kinship with 90s proto grunge bands like Nirvana, Alice in Chains, or Soundgarden and the aesthetic and political impulses of obscure 90s diy Ebullition Vermiform hardcore punk. Since its inception in 2004, the band has released five full length albums, seven EPs (some bordering on full lengths), two collaboration records with The Body, two collaboration records with Emma Ruth Rundle, and enough material spread out over splits to make up another four or five full lengths.
--

PORTRAYAL OF GUILT
“We each have our own idea of what it means to live through a period filled with perpetual dread, a slowly burning world, and overwhelming darkness. In the case of Portrayal of Guilt, their tortuous afterlife comes with grief, loss, masochism, suffering, and pain.

On CHRISTFUCKER, their second full-length of 2021, Portrayal of Guilt plunges headfirst into unfathomable depths, creating a work of art that’s powerfully unsettling. “We think of it partially in the sense of scoring a horror movie,” guitarist/vocalist Matt King says. “We wanted to create an atmosphere of anxiety and fear.”

The entirety of CHRISTFUCKER is set to unrelenting, nihilistic, howling soundscapes, created by King, drummer James Beveridge, and bassist, Alex Stanfield. Each track tells a story set in the darkest of settings for the listener to interpret and explore. 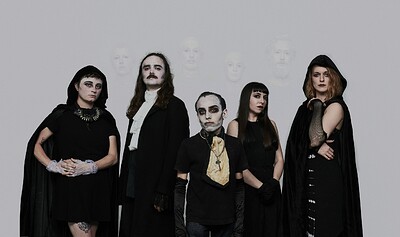