After releasing the raw-riffage, no-compromise 'Magick Rites' debut back in 2012, Dopelord have moved to experimenting with more complex song structures and heavier tones, as demonstrated on 2014's 'Black Arts, Riff Worship and Weed Cult' and 2017's 'Children of the Haze', which range from super-slow doomy giants to fast-paced punk. 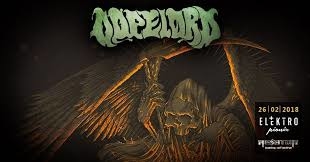