18+ event.
--
"If you describe something as 'girly', it's not necessarily the strongest," says 22-year-old Milly Toomey, from underneath her razor-sharp neon pink fringe. "It's kind of derogatory. I wanted to take that back, and be like, Why? I wanted to make pink punk again, and reclaim the word 'girl'." That feminist impulse has driven the defiant, brash electro-pop music Milly has made under the name GIRLI since she was a teenager in 2016, earning her plaudits from the Guardian, NME, and i-D, for hit singles like "Hot Mess" and her 2019 debut album, Odd One Out. Along the way, she crafted a persona for herself that was as hard as the word 'girl' is soft: "I built this thing up as GIRLI, like, 'I don't give a fuck what anyone thinks'. But actually at that time, I really did. Figuring that out, and learning that it was okay to be vulnerable, was so big for me." It was only after losing her record deal, relationship, and friendships that she was able to rediscover who she actually is, underneath the tough cybergoth facade – and along the way, she made the best music of her career yet.

Before she was GIRLI, Milly grew up in north London with her performance-loving family, both parents being actors. As a young kid, her rebellion was not being artistic: she was a science nerd, and later deeply into politics and her school debate society, even briefly serving as a Youth MP for Camden. She was bullied at school, and retreated into a fantasy world of reading and writing fiction. Then, during her GCSEs, she discovered music. Inspired by her favourite indie bands, like the Arctic Monkeys and Peace, she'd spend lunch breaks hanging out in the music department, playing guitar and singing, and eventually found herself two bandmates on JoinMyBand.com. It didn't faze 15-year-old Milly that her bandmates were 18; she confidently took charge. "Music was my obsession," she remembers. "So we had to rehearse five times a week, just so we could play these shit gigs at pubs. I was so determined." Even after her bandmates decided they couldn't hack Milly's pace, she wasn't deterred. She enrolled at ELAM (East London Art and Music), where she kept on honing her own voice: a kind of Gen Z emo rap take on Lily Allen, with the anger of Hole or Siouxsie and the Banshees remixed by the sheen of PC Music.

She was just 17 when she signed with Virgin EMI, and 18 when she released "So You Think You Can Fuck With Me Do Ya", a J-pop-inspired, shout-a-long anthem. Between racking up further plays on Beats 1 and BBC Radio One with her rowdy second single "ASBOys" and photobombing Ant and Dec at the BRITs, her acid pink hair quickly became emblazoned in the public eye. Behind the scenes, as an 18-year-old who had just received her first big cheque and moved into her own place, her life was becoming more and more intense. "Increasingly, after a year or two, it got very toxic," she says now. "I was suffering from a really bad eating disorder. I was taking a lot of drugs, and just like, destroying myself." Her label called her in for a disciplinary meeting, which went on to inspire one of her greatest singles, the pop-punk riposte "Hot Mess", on which she trills: "Also on that subject maybe you should change your look/ Your presentation's scruffy and it's time you really took/ This whole thing seriously, do you really want success?"

At the time, Milly was pissed off, and understandably so – why do people exonerate male rock stars, only to talk down to young women who behave the same way? But looking back at her time on a major label, she feels as though she was a lost kid, and needed more support. "There are some amazing, really weird, super unique artists on major labels," Milly says. "I think they make it work because they knew exactly who they were when they were signed. They have the confidence to say, 'I'm in charge'. But I was signed so young, and I really didn't know who I was. As an artist, I was very malleable."

Amongst all the backstage partying and drama, Milly released her debut album Odd One Out
in April 2019. Hailed as "gutsy" by the Guardian, and "unapologetic and audacious" by
Clash, it's a collection of songs that Milly is fiercely proud of. "The album is like this weird mix of happy and sad," she reflects, pointing in particular to the frank single "Up and Down" which addresses depression head-on. "Because I was experiencing these really intense
mental health issues, and also partying way too much, and then I fell in love for the first
time." Despite the love and honesty she poured into the project, she was released from her
record deal a month later.

To her surprise, it felt like a kind of relief, and a chance to rediscover her love of songwriting. "There was all this self-hate, 'I'm a failure'," she remembers. "So when I was dropped, it was like a weight off my shoulders, even though I was devastated, because I was so confused and lost. The music that I wrote in that period after being dropped, when I had literally nothing, is my favourite music I've ever made. I had no one breathing over my shoulder like, 'This needs to be a hit'. I was just like, 'What do I want to make for me?' I needed to vent in my songwriting – which was the reason I decided to do music [at first], so it kind of brought me back to my roots."

Hitting up musician friends like Slovenian singer-songwriter July Jones to join her in the
studio, Milly began sculpting a new voice for GIRLI: one that was even more raw and unfiltered than she had ever been in the past. She channelled her feelings about being dropped, along with the searing pain of her first break-up, into super vulnerable lyrics, leaning harder into a grunge-influenced, riot grrrl sound. "I was angry, more than anything," she says. "It made me realise that anger can be a good emotion, because it can spur you on to do things. If I hadn't been angry, I would've just been sad and mopey." But instead of falling into a depressive inertia, she created her furious, joyous five-track EP, Ex Talk.

Together with Jones, she wrote "Has Been", a DIY electro-pop kiss-off to all of GIRLI's doubters and critics. "I'm still a bad bitch," she cackles. "Throw a punch right in my face/ You know what? I like the pain!" The song is a raucous statement of intent, rejecting the idea of being a "conveyer belt" artist, and proving that GIRLI is an artist who won't be pigeonholed by a fickle industry. "It was really cathartic – kind of triumphant," Milly says of the writing process. "Especially as a young woman, [when I got dropped] I felt like, 'All these people think I'm a failure. They think I'm done.' I wrote 'Has Been' when that started to change, and I was feeling more like, 'You know what? Fuck all these people. I can do this.'"

The rest of what Milly nicknames her "heartbreak EP" focuses on romantic and platonic
relationships that she lost in that same period, as the same friends who had joined her selfdestructive partying began to gossip about her. "Shame" is a twisted, synth-driven rallying cry against a shitty ex, while "Passive Aggressive" tears down two-faced fake friends over a deep, rumbling bass. "I was really at a vulnerable point in the past, and I was really clinging to people," Milly says, "I was just letting people treat me like, shit, basically. My self-esteem was so low. I'd get really drunk and I just spill everything I was feeling. And then those people would then talk to other people and be like, 'She's a mess'. My words would get twisted... It was all this fake friendship, and the passive aggression that comes with it. Now, I probably have five friends that I hang out with on the regular, and I'm the happiest I've ever been."

Elsewhere, on "Letter to My Ex", GIRLI's pain is exposed like a beating heart as she chants
"I hate how much I miss you" over the top of distorted, punk synths. It's a document of that
particular emotional haze you find yourself in after a relationship ends, when, as Milly puts it, "you don't know if you feel angry or sad or happy or sexy or all of it". One of Milly's favourite tracks on the EP is "Throw Myself Away", which – despite GIRLI's debut single featuring a promise that she would "never ever" sing a ballad – is a punk take on the break-up song. In a soul-baring vocal take (which was the first one she recorded), Milly lays it out over sparse guitar strums: "I throw myself into other boys' arms, just to get over the other one".

"I'm really just trying to see the idea of success as being like: if I can connect with people, if people can relate to these songs, that would be amazing," Milly says. Newly confident in her identity as a bisexual woman and an artist on an independent label, she's releasing this EP into the world as a reintroduction to GIRLI. She's grown a lot since she first emerged at 17, not least because of how she's thrown herself into the online LGBTQ community, but also in her embrace of different sounds and styles, pushing the boundaries of what actually is 'girly', anyway. "This EP is me not being afraid to make new things. Before, I think I was always trapped by thinking, 'Is this GIRLI enough?' Well, what is girly? I'm kind of starting from scratch, and I don't need to be boxed in." 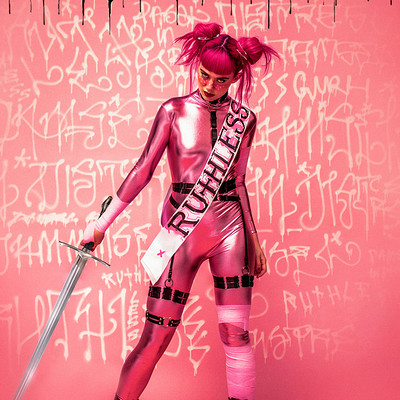