Few bands have the bravery, determination and self-belief to survive
times as tough as Phobophobes have endured, pretty much intact. And
even fewer have the talent to rebuild themselves with such creative
voracity, making some of the most alluring, unsettling, inventive and
cutting-edge music of the age – the sound of The Velvets, Wire, The
Cramps, The Monks, Leonard Cohen and Country Teasers fed
through the foul filters of South London. No matter what fate throws
at them, knocks that would destroy less hardy bands, Phobophobes
are too strange and special to be beaten.
It’s been the rockiest of roads and the brightest of redemptions. In
2013 singer and guitarist Jamie Taylor started “a three-piece with a
drum machine in a pub” with his drumming keyboardist schoolmate
Chris OC. They called themselves Phobophobes, and their simple yet
confrontational garage punk tunes saw them instantly immersed in the
South London’s gristle rock scene alongside Fat White Family, Goat
Girl, Shame and their far-reaching diaspora.
Phobophobes’ story started rosily: Jamie built a studio in Peckham
and, between stints writing songs in Paris and building art
installations for his old Slade School art tutor Phyllida Barlow in the
USA, Phobophobes gathered a solid local following, playing venues
like the Queen’s Head and the Brixton Windmill and supporting The
Fall.
Via an ever-revolving cast list – the group evolved into the gloriously
cranky outfit that released 2015 single ‘Make A Person’, and began
recording what was to become debut album, Miniature World, at
Utopia Village in Primrose Hill and at Abbey Road. At Abbey Road
they even ‘stole’ swabs of saliva from the oldest microphone, hoping
to get a tiny bit of Paul McCartney’s DNA onto the album artwork.
“It could have been anyone’s,” Jamie grins. “It was probably dead,
the bacteria from McCartney.”
Then, things went seriously, and tragically, awry. Guitarist George
Russell died in 2016 from a drug overdose. “He got a bit too into

heroin and died,” Jamie says. “Elliot [Nash], our bass player lived
with him, they were brothers, basically, best friends, they had a great
musical companionship. He didn’t want to do it without George so we
went back to square one.
After eight months without a show, the band reconvened on George’s
birthday to play a mental health charity gig at the Windmill in Brixton
in his honour and set about completing the album using recordings of
his playing intended for demos, hiring production legend Youth to
mix the record. “We thought the album deserved more than just going
on Soundcloud,” Jamie says. “We wanted to keep fighting for it.
There was loads of my work there that had fallen apart through
various circumstances. I wanted to do it as well as keeping George’s
legacy going.”
The good people of Ra-Ra Rok records – formed by long-standing
Camden record store proprietor Rok Pete Donaghy and these days run
by the managers of Black Midi and Shame - stepped in to finally
release the album in 2018, with an accompanying book of George’s
poetry. 6 Music supported the album and further singles ‘The Never
Never’ and ‘Child Star’. And Steve Lamacq played the ruined country
pop of ‘Human Baby’ every day for a week.
Having since played a tour with Killing Joke and demo’d new
material beneath the group’s DIY built studio underneath the Brixton
Windmill, and after years of upheavals, Phobophobes is now a solid,
front-facing unit again. 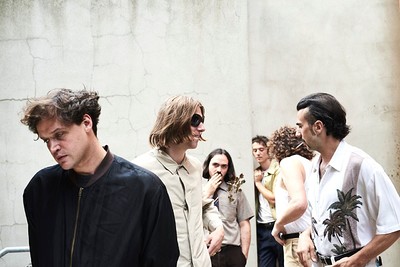