— The Loco Klub
A bigger darksynthwave event in the crypts of Bristol, second of it's kind
price: Tickets Below

It's back, it's bigger and it's badder. Space Jams & Steel City Collective team up once more to bring you another haunted night in the crypts of Bristol. Our headliners include the long awaited UK return of DAN TERMINUS, as well as the debut live performance from rising star DEADLIFE, with new support acts and returning ones. We are bringing you the UK's premier dark synthwave event once again.

Dan Terminus is a synthwave musician and producer from Lyon, France. In 2014 he self-released his first albums: The Darkest Benthic Division, Stratospheric Cannon Symphony, and the Rêverie EP. In 2015 Dan Terminus was picked by Finnish label Blood Music, who released his album The Wrath of Code. Two and a half years later in 2017, Dan Terminus released a follow-up album Automated Refrains, under the Blood Music label.

Raised in his "grim, rundown" hometown of Crewe, UK, DEADLIFE would spend hours locked away in his room playing games. He has always loved the music from those games and the influences of the stylings can be seen mirrored throughout his work.

Between a vivid imagination and a sensitive side, the producer knew that he would come to express his unspoken emotions via the best channel he knew: music. An electronic musician with a classical background, he formed and played drums in a band, playing numerous tours, before he discovered band life wasn’t for him as he felt held back creatively. With the driving forces of ambition and passion, DEADLIFE began to explore the world of music production.

His debut album, Bionic Chrysalis was selected as Best Synthwave Album 2017 by MetalSucks, and he had two albums ranked in the US Billboard’s Electronic Album Sales chart top 20 in August 2019. His album Singularity was voted best Darksynth Album 2019 by followers of Russia based label Retrowave Touch.
LEBROCK

Combining 80s style melodic rock riffs with shimmering synthwave melodies and a heartfelt vocal delivery, members Michael and Shaun have established themselves as some of the most uniquely compelling artists within the world of retro revival music. The results speak for themselves. The retro rocker’s first E.P Action and Romance, is a synth-heavy fan favourite that has earned millions of Spotify streams to date as well as features on the popular Youtube channel, New Retro Wave.

LeBrock found success once again when they adopted a stronger rock sound with all vocal tracks on 2018’s Real Thing. Packed with fist-pumping retro anthems, the artist’s distinctive and increasingly personal style again earning more features on NewRetroWave along with widespread acclaim from fans and critics alike. Add to that a full European tour along side synth rockers Dance with the DEAD IN 2019 and a sell out UK headline tour in 2020, Lebrock have cemented themselves as one of the premier forces in the Retrowave scene

Aeronexus is a UK based electronic music artist who fuses a range of styles, including melancholic ambience, 80s synthesisers and heavy distorted darksynth.

Multi-instrumentalist Dark Smoke Signal is a Synthwave producer from the new music hotbed of Bristol, UK. Raised on a diet of 80s Heavy Metal and Synthpop, this former Metal guitarist switched to the Retrowave world in early 2018 but has stayed true to his roots.

Songs are a diverse mix of instrumental and vocal styles with a melodic edge that are guaranteed to hook the listener in. His live shows are known for engaging the audience with a retro futuristic assault on the senses.

THE PHANTOM DIVISION
The Phantom Division are a 3 peice synthwave group from Cornwall, UK. 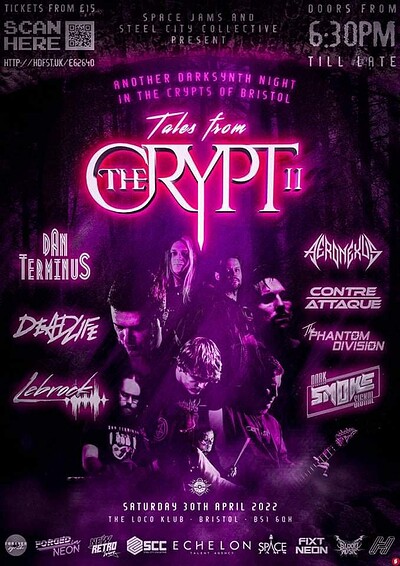