The New America + Everything Else + Hierarchy

— The Louisiana
A night of head splitting punk and indie to make you happier
time:20:00
price: £5 Adv. £6 OTD. Message the band for the cheap list

The New America
The New America is a Bristol punk band brought together by a mutual love of bands like Idles, Heavy Lungs and Rage Against the Machine. Imagine hitting your head and liking it. This is the New America's live sound. The band's wave of success has been swift and merciless. Hilights of the band's career include: playing Cher's funeral, recording a live album in the belly of a whale, and making Kurt Cobain's Top Albums of 2018 list. A sweaty sound collective for everyone.

Everything Else are currently making ground in the South West of England playing energetic, pop-punk shows in a number of venues. With new original songs being added to their sets on a regular basis, Everything Else are a band worth keeping up with. Their dynamically varying shows have began to turn the heads of the live music community and the boys are relishing the early stages to their life as "Everything Else"

Message the band to get on the cheap list! 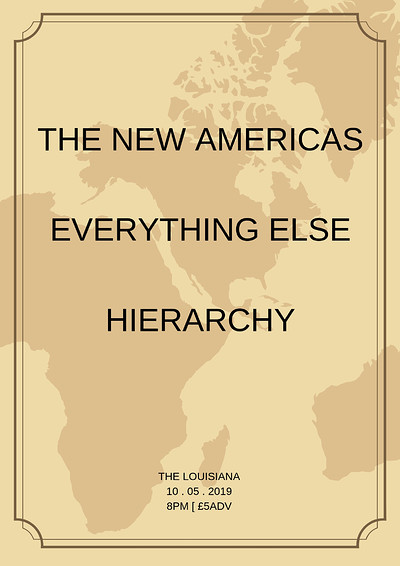