— The Louisiana
Mr.B The Gentleman Rhymer
price: Tickets Below

His videos have garnered millions of view on YouTube and his media appearances have included Rapping for Jeremy Paxman on Newsnight, playing live on BBC Radio One for Rob Da Bank, Nick Grimshaw and Scott Mills, on Radio Two for Claudia Winkleman and Steve Lamacq, 6Music for Tom Robinson and Shaun Keaveny and for Zoe Ball on Sky Arts. He was also once the front page of the Wall Street Journal and was described by the Daily Mail as ‘Controversial’. 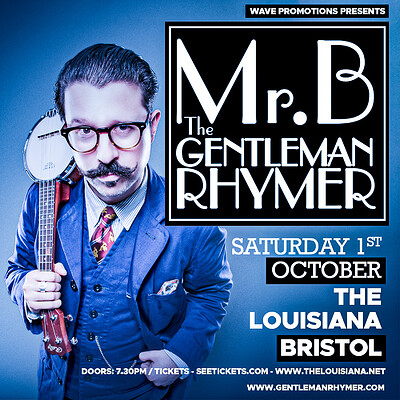