Wizzarding Promotions presents an evening of hellish riffs and bleak catharsis at The Old England, featuring:

After the release of their debut full length "I Live Inside a Burning House" and the accompanying tour throughout the United States, San Francisco's Body Void returned yet again to the watchful eyes (and ears) of Greg Wilkinson at Earhammer Studios to lay down two new tracks that has become "You Will Know The Fear You Forced Upon Us".

Taking current events and the social climate that permeates society we exist in, Body Void has exhumed their outlook on the state of marginalized people living in the world today. The fear of not knowing if today will be your last day to draw breath without the fear of violence against you, or the fear that a door knock will lead to the separation of your family and the life that you are accustomed to day-to-day.

Harnessing those feelings from those around them, the band has crafted their response to the current surroundings in the form of two new doom/drone opuses that continue along the path of treaded work, but refined to best project the anger and rage that haunts anyone not of the status quo.

Known for: long, slow pieces that rumble venues into oblivion.

The Slow Dying of the Great Barrier Reef' is their second full length release, and is in many ways a continuation of earlier work; a strong focus on multiple layers and frequencies coming together to create an enveloping and often oppressive sound is very much the band's MO.

'The Slow Dying of the Great Barrier Reef' is a two song opus with quite self explanatory subject matter, lyric-wise. Outside of the band, Tanya, is a volcanologist with a passion for enviromental science. She explains:

"The current political discourse on how to reduce our impact on ecosystems is stuck in semantics, all while these systems degrade. I believe we can reduce our impact, and I am hopeful that solutions will be found. However, many of these solutions are halted, while governments argue over who is to blame. The album title makes reference to the fact that climate change is affecting this habitat extremely, and inaction is one of the biggest causes of it's decline."

POHL are Will Pearce (guitar/vocals) and Jamie Thompson (drums).

The duo draw on a wide range of influences, from thrash, prog and psychedelic rock to hardcore punk, stoner and grunge, all while remaining uncompromisingly experimental and original.

2012 saw them earn a reputation for their intense live shows and gain critical praise for debut EP ‘POHLSMOKER’, recorded as a two piece. In late 2013 they were joined by Hugo Morgan (The Heads/Kandodo) for the recording of a second EP, POHL II. The trio gigged extensively throughout 2014 before imploding by the year's end.

All was silent until early 2017, when Jamie and Will quietly reconvened and began writing an ambitious new full-length LP. Older and wiser but no less intense, the duo have returned to their primitive roots for an album of mind-melting, bad-trip noise rock that realises their nightmarish vision more completely than ever before. 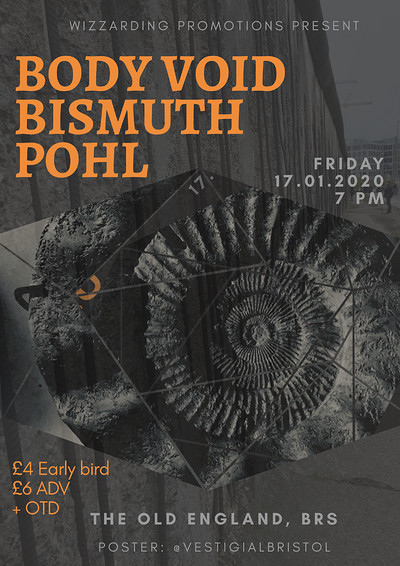