It's what young colts dream of: being on the road, playing shows, living a musicians dream...

Sadly few actually have that opportunity. Sons of Morpheus do, but they know: It brings sweaty shows and fans lurking for autographs on the bright side. However dragging gear into a bus at 4am, drenched boxes of vinyl, broken or broken-into cars and corrupt custom-officers on the other side. It's both ups and downs but for Sons of Morpheus (maybe just for the sake of it?) a life worth living.

But back to square one: Before Sons of Morpheus were able to tour across Europe (f.e. with Karma to Burn and Kamchatka) and playing shows in 17 countries including USA, a simple feeling gave birth to

everything: The need to crank up an amplifier and doing some good-shit rock music. Fuck the world!

In 2017 Sons of Morpheus appear even more on the spot, their sound is gloomier yet explosive. How come? For sure producer David Weber, legendary Montreux Jazz Festivals Coordinator, deserves a line or two here. Back in the days, he used to capture and helped to develop the dark and threatening sound of Switzerland's most exciting and profound export: The Young Gods. It seems that somehow some of it got stuck in that desk... Or maybe its just the world we live in that makes it sound like that. "Nemesis" mesmerizes with the 70's exuberance and liberalism but bashes your head with the modern generation Y's shakiness and unsoundness. Always driven by - boy, and you'll hear that - the

simple and basic instinct that brings three kids down to a basement to form a band: The all urgent need to crank up an amplifier, break a skin or two and make the building shake. And by doing so, for

a few precious minutes, change the fucking world with it.

Since forming in Autumn 2011, Suffolk sludge/stoner outfit Old Man Lizard have received praise from critics and fans alike for their live shows and recorded output. They have officially released a split 7" with Earthmass (on Big Riff Records) and Debut album "Lone Wolf Vs Brown Bear" (on Wickerman Recordings). The power trio, made up of Jack Newnham (also of Slabdragger and Meadows), Gav Senior and Dan Beales have played the main stages at Desertfest, Belgium and Hard Rock Hell, Wales. They have toured the UK several times including shows with heavyweights Conan and Dopethrone, as well as other seminal acts like Dead Meadow, Arabrot and Honky.

In addition to a tour with Black Rainbows in June, the latter half of 2015 will see the release of a new Vinyl 12" from Old Man Lizard and a Euro/UK Tour to promote it. The album, to be released by Heavy Psych Sounds, will consist of brand new recordings of old demo tracks as well as completely new material; for fans of Harvey Milk, Taint, Kyuss, Baroness and Earth. 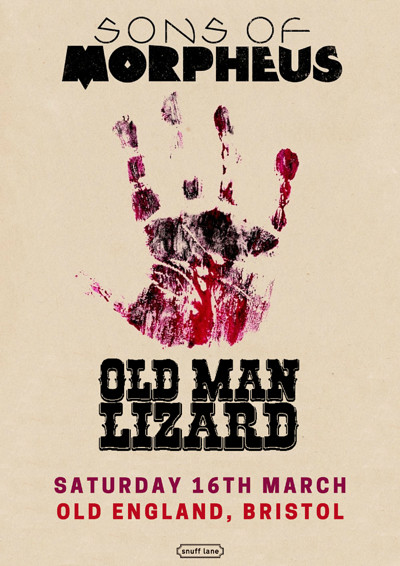