— The Old England Pub
Totality resurrects Fuckery Witchcraft with 13 completely rad bands from all over the fucking place. This will slay.
time:15:00
price: Headfirst Tickets

Can’t believe I’m doing this. Incredibly pleased to have all these rad people involved in this year’s Fuckery Witchcraft. It’ll be heavy, manic, brutal, joyous, exciting and dark. Halloween is the only holiday of the year I observe. Xmas can do one.

So it would be fucking great to make this one a total banger. Not only are there 13 stupidly good bands but we’ll have party time DJs and visuals as well to ensure total sensory overload.

BADBAD is a solo project from Paris. Her debut EP was released in 2014 and her album “Nowhere” just came out in March 2018.

Welcome to the world of bellies!

The duo are renowned and cherished as an unforgettable live experience having played extensively in the UK’s exceptionally healthy and thriving underground scene. They’re as comfortable trashing people’s necks at

festival stages every year. BIG LAD – Pro Rock is released by Box Records on transparent yellow vinyl on the 19th of October 2018.

“They play right in the middle of the crowd. It’s maxed out, exhilarating stuff, which given them the ability to sneak onto pretty much any line up, from a grindcore night all the way to a warehouse

“A mind expanding kaleidoscope of live and manipulated sounds – a brutal

culmination of breakcore, noise rock and post-hardcore” Louder Than War

“Ho99o9 and Sh*t Wife are genuinely two of the most mind-blowing live bands I’ve seen this year.” ArcTangent

Once Dali dreamt of a band that played 64 gigs and then stopped, "Ephemeral Project 64"... and so far, that is the only plan they adopt, the rest is spontaneous and free.

Harpoon are Tina Hitchens and Aron Ward, an improvisational rhythm-noise duo using only 2 cheap drum machines and a handful of shit pedals to create something horrible or accidentally danceable.

Frantic but always in sync.

Bristol three-piece Olanza released their debut album ‘Bonanza’ earlier this year. After 4 years of playing in and around Bristol’s DIY scene, the band’s sound has evolved from their early post-hardcore leanings to a punchy instrumental, desert-rock-noise band inspired equally by Neil Young and Beefheart as Fugazi and Lungfish. Olanza’s music is hard to pin down, but if you are a fan of (for lack of a better phrase) progressive guitar music, check them out.

Remote Viewing is a band with five humans. They are friends, and generally OK people. Ex-members of: Palehorse, Million Dead, and others.

The music tells the story of cousins choking to death on the night bus. Of failed suicide attempts in provincial supermarket carparks. Of quiet, kind, generosity. Of parents dying.

Of beautiful flower arrangements. Of a lack of patience, and then reprieve.

Working from the same filthy, hot coal room as The Birthday Party, Cpt Beefheart and Morphine - London-based three piece: SNACK FAMILY have been creating an unapologetic, driving sound since 2011. This is music that gets right back to the heartlands, the heart and soul and

meat of the matter; music for the times we're sweating through.

replete with gravelly drumbeats, striptease guitars and the most

gut-twisting Sax we've heard in yonks..Sleazier than Waits out on the

"Snack Family's music oozes… An unlikely middle ground between Battles and The Birthday Party." THE QUIETUS

Well Hung Game is James Allsopp on Saxophone and Ed Dudley on electronics. The saxophone is fed into and manipulated by a Mixing desk and pedals creating a varied and relatively volatile sound world. Their shows are largely improvised and generally horribly loud. 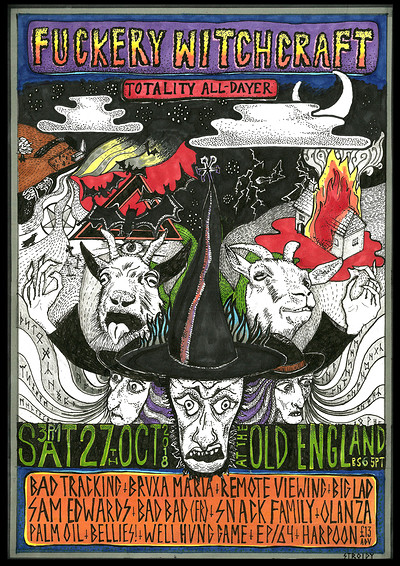