Welcome Portugal’s fuzzadelic, heavy-psych, wild-spirits THE BLACK WIZARDS to Snuff Lane this June. Their live performances are known for being an intense explosion of emotions with lots of soul and fuzz!

Co-Headlining the night with French heavy-blues rock-trio DÄTCHA MANDALA; who bring their energetic and mesmerising performances to the Old England.

Born in the digital era, The Black Wizards are four analog musicians
that spread fuzzadelic grooves into the air. Drinking from the same
fountains as many of the contemporary bands around, The Black
Wizards present us with a set of songs that give a new twist on
previously heard sounds and stamp their own personality.

The Black Wizards exploded on the scene in late 2015 with well acclaimed first album “Lake of Fire”. In a short space time, they evolved from a well-intended but quite appealing EP (Fuzzadelic) to one hell of a long play. Followed with European tours and also quite relevant appearances at festivals, The Black Wizards have grown, not exactly old but experience wise and hence comes “What the Fuzz!”, their second record. “What the Fuzz!” Revolves around the moment when these wizards agree it is time to let the avalanche of heaviness crumble down on you. The Black Wizards upped their ante with sonic experimentation without ever losing sight of the core roots of having their feet on the ground.

They’ve immediately jumped on the road to conquer Europe again. Their live performances are known for being an intense explosion of emotions with lots of soul and fuzz! The Black Wizards still building their path and are one of the most prolific and promising bands around, especially being one independent and DIY band.

Dätcha Mandala is a power trio. Founded in 2009, the band’s members include Nicolas Sauvey (lead vocals, bass and mouth organ), Jérémy Saigne (guitar and back-up vocals) and Jean-Baptiste Mallet (drums and back-up vocals). With influences ranging from Led Zeppelin to the beatles, it’s no surprise that the lads count such bands as Black Sabbath, Kyuss, Tool, Black angels, Queens of the stone age, BRMC, AC/DC, the doors, hendrix and more, amongst their growing list of influential vibes. When asked, they tend to describe themselves as a psychedelic rock band engulfed in heavy blues. 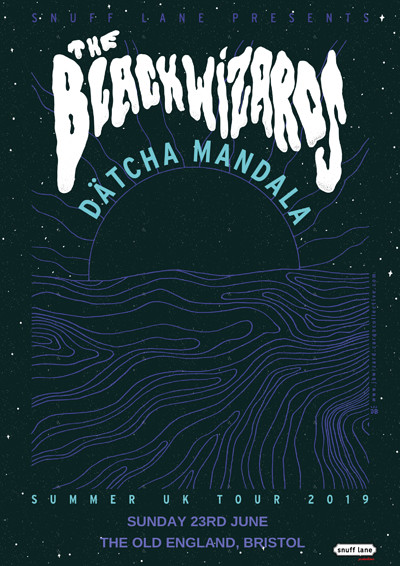