Wizzarding Promotions proudly presents to the denizens of Bristol, Avalon, and beyond:

VŌDŪN are a heavy, weird & soulful, afro-futuristic tribe from London - A raw and powerful slice of voodoo fuelled turbo-metal riffage not to be missed. Fusing heavy rock, power soul, West-African rhythms, and psyche, they rock like no one else. Their mesmerising live shows have seen them stun & entertain audiences on tours and at festivals across the UK & Europe, including Hell Fest, ArcTangent, Blood Stock Festival, Desertfest and Afropunk.

They have supported Orange Goblin at Koko, in London, and have also both toured with and loaned vocals to albums for Uncle Acid and Turbowolf. The first single entitled 'SPIRITS PAST', from their second album, has been recorded with award winning producer Tom Dalgety (Royal Blood, Turbowolf), which sets the tone once again, for a completely unique heavy and eclectic follow up album in 'ASCEND'.

More TBC and all on Thursday, 27th February 2020 at The Old England! 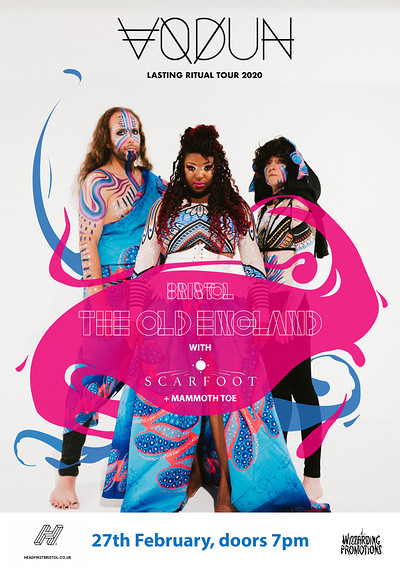