Award winning festival music venue Chai Wallahs have teamed up with The Old Market Assembly to bring a series of monthly shows throughout 2020 running from February through til November.

For the opening night in our series of Chai Wallahs and Assembly nights collaborations we are super excited to welcome back to Bristol one of our all time favourites...

Influenced by New Orleans Jazz, Soul and Hip Hop, Lazy Habits have made their presence known with their own brand of hard hitting beats and slick lyrics about modern British culture and urban life.

The London based six-piece have notched up shows at legendary venues including Shepherd’s Bush Empire, The Roundhouse, KOKO; and have collaborated with renowned names of the industry including Ghostface Killah (Wu-Tang Clan), DJ Premier, Reeps One, Dizraeli, Baby Sol, Hackney Colliery Band and Joshua Whitehouse.

CW resident DJ's spinning tunes from Hip-Hop, Reggae, Afrobeat, Bass Music and House to all things to make you dance. 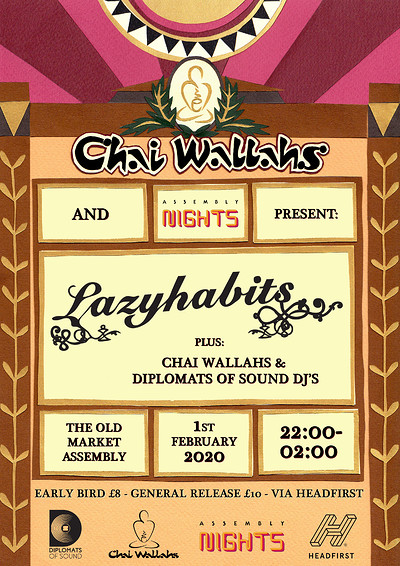