Pariah: is a 23 year-old RnB singer/songwriter born in Leeds and raised in Bristol. She has been singing and performing as long as her family can remember. Joining a musical theatre group at age 11, her passion for singing, dancing and acting grew and she started writing songs at 12 years old. From then she explored music within girl groups, musical theatre groups and writing and recording her own songs at home on existing instrumentals.

After working with some of Bristol’s talented producers, Pariah is now finally releasing her first EP “Limit”. Written in a time of self – discovery for Pariah, the EP is an honest exploration of our own limits; the limitations put on us by ourselves and others and finding the strength to break them.

Chinchilla: Strong woman, Smart woman, Proud Woman, CHINCHILLA. A mantra this British ﬁery ‘Urban Pop’ artist from London lives by. This self-made artist has spent the last year writing, producing, performing, reﬁning her craft and working on her debut releases which blend frank emotion with sassy, ﬁerce feminism, coming March 2019. Drawing on inﬂuences such as Beyonce, Rihanna, Michael Jackson, and Mark Ronson, Chinchilla is renowned for her live shows which bring attitude, high-energy, and soaring vocals to the stage, complemented with sharp empowering lyrics; a bundle which truly captivates her audience. From The Great Escape, to Liverpool Sound City, to BBC Introducing hosts Amplify, she has been gigging her material at some of the UK’s hottest venues and events, including Old Street Records where she performed a set of Skunk Anansie hits with their legendary guitarist Ace

GINS: After studying alongside fellow artists such as Tony Njoku at The Academy of Music in Cornwall, GINS (FKA Georgie Biggin) has developed a rich sound that has evolved from guitar-based folk to electronic production and acapella looping. After living in the Westcountry; including a guest slot on BBC Introducing and playing alongside Jess McAllister and Circe’s Diner, GINS relocated to the heart of Bristol. Now working on her debut EP, GINS sound is constantly evolving with elements of R&B, electronica, synthpop and hip-hop fusing to create her own unique genre. New single ‘Bruise Your Ego’ out now:https://uncrecords.bandcamp.com/album/bruise-your-ego

GINS has just released her single, with a music video coming soon - so the timing should be pretty good to promote this show 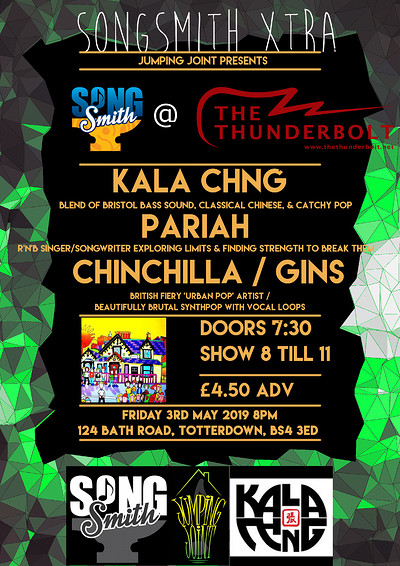