Rauschenberg are an electronic-rock band from Bristol formed in 2015

Rauschenberg's self-titled debut is a rock n' roll record you can dance to. The album features a collection of dream pop and garage songs along with longer spaced out motorik grooves.

Skypark is new track on ‘Raving Pop Blast’s’ compilation ‘Strange Creatures’ (The Best Of Rebels Volume Two) and is released March 2, 2021 on Vinyl,CD&DL.

Tobi, Fresh On The Net "They had me in the first 10 seconds on their new single Stuck…” Tom Robinson, BBC Radio 6

"This is energetic, slightly sardonic Alt Pop with a large twist of chic – the style, not the band! ON STUCK

Annette’s vocal, semi-spoken, plays off against jaunty uptempo but spacious Alt Pop with shades of The Ting Tings in a jam with Sorry." Neil March, Trust The Doc Blog & Exile FM

A four piece pulling from an eclectic combination of post-rock, heavy electronic and krautrock, blending huge synths with reverb drenched guitar and chopped up visuals. Expect anything from a warm ambient sound bath to dark, dystopian and thunderous. 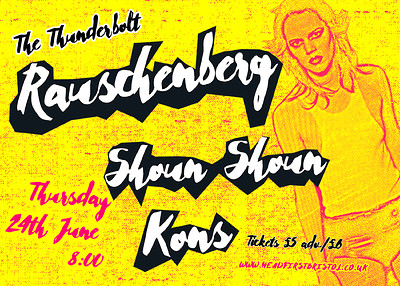