Mr.B The Gentleman Rhymer
From deepest darkest Surrey, and with a decade of gentlemanly catterwalling under his belt, Mr.B brings you Chap-Hop, re-acquainting Hip-Hop with the Queen's English from whence it came. His legendary live recitals have earned him plaudits, largely from top shelf gentlemen's quarterlies.

jack calloway & his dance orchestras
Internationally renown bandleader, composer, dancer, socialite, Jack Calloway and his purveyors of swinging syncopation come in the form of The Jack Calloway Dance Band & The New Sheridan 7. Founded in 2014, by Jack Calloway & Raphael Dufrense, the Dance Band brought fresh faces and an authentic sound to the British transatlantic, hot-swing and trad scene. Soon becoming fondly regarded across the nation - with Jack himself becoming increasingly popular in Europe as a quintessential British gentleman and unmistakeable showman. In January 2019, Jack Calloway and fellow hot-swing and dance music enthusiast Paul Archibald formed the New Sheridan 7, named after the little-known society of chaps and dandies they are both members of, in London. Wanting to bring the authentic sound of British broadcasting and hotel orchestras to music venues across the continents, The New Sheridan 7 have already taken the scene by storm and continue to soar both transatlantic and nation wide.

MR B THE GENTLEMAN RHYMER Hip-Hop Was To Blame After All - gentlemanrhymer
2:35 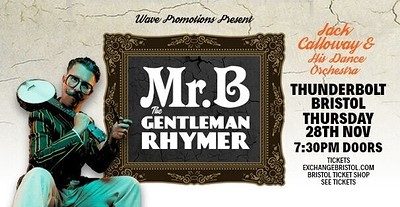