Smerin's Anti-Social Club, The Carny Villains and DJ Dad join forces for a monster party at Bristol's Trinity Centre on Friday 12th May.

Smerin's are back with a new album. Yes that's right... a NEW ALBUM!!! 'Jelly Deals' is due for release in late April and to celebrate the occasion we've lined up a massive launch party at Bristol's Trinity Centre on Friday 12th May.

For the uninitiated, Smerin's Anti-Social Club have firing up festival crowds and gig-goers across the land for the past 15 years with their inimitable blend of brass-heavy funk, swing, rock, drum ‘n’ bass, and ska. Although they’ve made ripples on the radio with releases such as their infamous dub rendition of the Doctor Who theme featuring killer vocals of the late great Tenor Fly, and thrilled fans with the willfully schizophonic self-released Primordial Cordial LP, it’s their enviable reputation as a live act that has long been winning this 8-piece band appearances at the country’s top festivals.

We're honoured to have our friends and sure-fire party starters The Carny Villains join us on the lineup. They've gone from strength to strength since they took Bristol by storm at the Invisible Circus's legendary Carny Ville events, and we can't wait to see what they been up to in the studio over the Winter months.

Known for their raucous blend of stomping swing, ska and Balkan-style folk played with the riotous energy of punk rock, The Carny Villains enigmatic and animated live shows are are always something to behold, punctuated by off the wal theatrics, humour and showmanship.

Bristol's one and only DJ Dad will keep things flowing with his seemingly endless collection of great tunes. 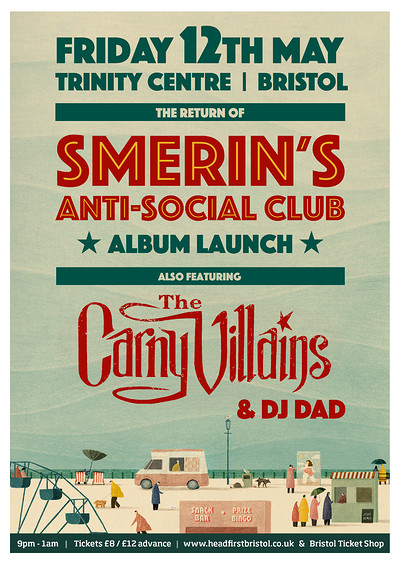