47Soul – the alternative roots-pop supergroup comprising musicians from Jordan, Syria and Palestine, will be debuting their band new album "Balfron Promise" at an exclusive Bristol show in the incredible Trinity Centre Venue.

The quartet have become renowned for inventing their own genre Shamstep (also the name of their debut EP) – which fuses hip-hop and pop lyrics in English and Arabic, and electronic invention with elements of Arab roots music.

They also have a formidable reputation as a live act built on their powerful, energetic and intoxicatingly otherworldly live shows which have been seen at festivals from Glastonbury to WOMAD to London’s Jazz Café.

Beyond their musical influence 47Soul have become renowned as a voice on social issues – the band’s very name is an allusion to the occupied Palestinian territories and their lyrics often tell stories of oppression and the efforts of normal people to combat it, not only in the Middle East but around the world.

The show will see the band perform for the first time tracks from their upcoming full-length debut album Balfron Promise which is due for release in February 2018.

Dizraeli & DownLow have long done hiphop PA shows as a sideproject to their band the Small Gods, but the past year saw them step it up to a new level - starting with a show opening for the Foreign Beggars to 3,000 people in Paris and going on to play in Koko, The Clapham Grand and Shepherds' Bush Empire in London as well as tearing up Boom Town and Shambala festivals over the summer, and taking their show on a UK tour in October.

Dizraeli & DownLow have built on the Small Gods' already big, loyal following with a lot of new fans from the purist world of hiphop, and summer 2014 is shaping up lovely, with shows at Glastonbury, BoomTown, Green Man and Shambala festivals confirmed alongside many others. Along with new releases as well as new videos and the monthly GodCast... It's going to be a good one. 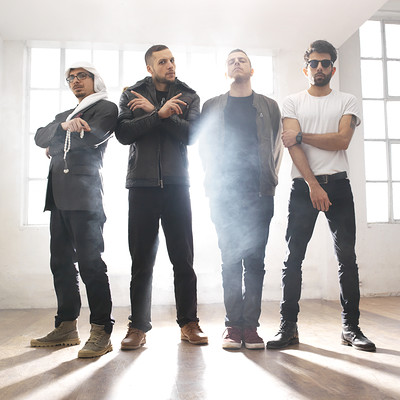