"Klein is a multi-disciplinary artist living and working in London. Her catalogue of releases include: Frozen (self-released), Lifetime (ijn inc., 2019), cc (self-released, 2018), Tommy (Hyperdub, 2017), Lagata (self-released) and Only (Howling Owl, 2016). She was hand selected by Bjork to tour with her (2018) and has collaborated with the likes of Mica Levi, Caroline Polachek, Wu Tsang, Josiane M.H Pozi, Diamond Stingily and numerous times with the Turner Prize winning artist Mark Leckey, who opened for her at her Camden Underworld show (2020).

Klein has been commissioned for performances at noteworthy art institutions such as the Serpentine Gallery, Barbican, MoMa New York, Gavin Brown's Enterprise (NYC), Art Basel, Southbank Centre and Unsound festival among others and has also directed theatre musical Care (London ICA, 2018), of which she is turning this into a full length film to be released later in 2021. She is currently exhibiting a solo show titled e45 at the Cabinet Gallery until 14 August. ’She was an inaugural winner for the Daphne Oram award (2017) and received a fellowship in experimental music by the Arts Foundation (2018)." 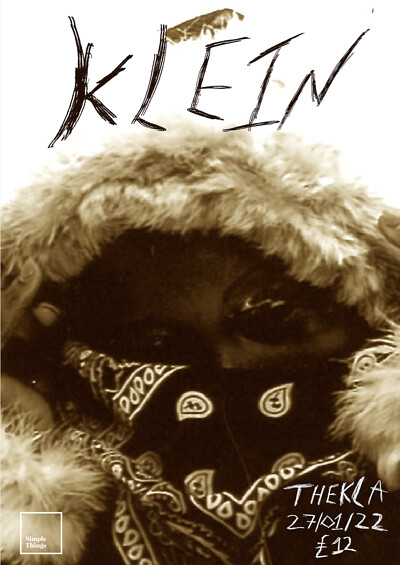