Born and bred in Manchester, Josh Jones is one of the most refreshing and original voices to emerge from the North-West in recent years.

In just five years Josh has gone from open spot to a TV regular, with his breakthrough year coming in 2020 after making his hilarious debut appearance on E4’s 8 Out of 10 Cats and subsequent appearances on ITV’s Jonathan Ross’ Comedy Club and Ch5’s Goes Horribly Wrong series.

Josh hosts his own historical-gossip podcast Dead Drama and has made guest appearances on Russell Kane’s Evil Genius and Tom Read Wilson’s Has Words With podcast.

Josh was nominated for the Hackney Empire New Act of the Year and named one of Chortle.co.uk’s Ones to Watch. He was also selected for the prestigious Pleasance Comedy Reserve at the Edinburgh Fringe and was a finalist in the prestigious BBC New Comedy Award. 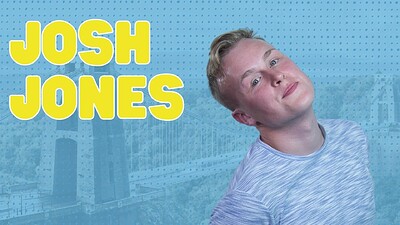