Down at the Barn with Leonie Evans + Adam Beattie

— Winterbourne Medieval Barn
Leonie Evans hosts Down at the Barn, an evening of intimate music in the unique Barn setting.
price: Headfirst Tickets

Leonie Evans hosts Down at the Barn, an evening of intimate music in the unique Barn setting. September’s guest star is Scottish singer-songwriter and guitarist Adam Beattie, a celebrated musician of the London scene. You’ll hear from both Leonie and Adam throughout the evening.

Having roots in Scottish folk music, as well as a lifelong interest in old time jazz, blues and other folk styles, Adam’s music spans many genres, but is all held together by his distinctive voice and narrative lyrics.
Beattie has recently released his brand new solo album ‘Somewhere Round The Bend’ on 12″ and CD which has received praise from the likes of Mojo Magazine describing it as “Uplifting reveries of love and loss through smoky jazz and romantic balladry”. The album was championed by BBC Radio Scotland presenter Roddy Hart, who featured it as his ‘Record Of Note’ and invited Adam to speak on the show and curate a selection of songs as his ‘Me-In-3’ guest.
‘Somewhere Round The Bend’ came fresh off the back of his Rough Trade release with PicaPica, a collaboration album with Grammy nominated producer Sonny Johns, BBC Folk Singer Of The Year Josienne Clarke, and singer-songwriter Samantha Whates, as well as his Scottish supergroup Band Of Burns’ latest release being named ‘Album Of The Month’ in Mojo (4 stars) and BBC Music Magazine (5 stars). After four studio albums collaborating with notable producers, this new record sees Beattie at the helm for the first time, on fire as a multi-instrumentalist, arranger and producer.
Over his years of extensive European touring and festival appearances, Adam has played opening shows for many of his musical heroes; Bert Jansch, Jolie Holland and Sean Hayes.
The new album features drums from Mercury nominated Seb Rochford (Polar Bear, Patti Smith, Adele), double bass from Fred Thomas (ECM Records), backing vocals from multi-platinum singer-songwriter Fiona Bevan (Lewis Capaldi, Billie Marten, Matthew E. White), as well as Adam’s regular badass bandmates Marco Quarantotto, Zac Gvirtzmann and Filippo Ferazzoli.
~~~
Our host for the evening, vocal talent and multi-instrumentalist Leonie Evans, also has a passion for history so plays a lot of pre war Jazz, blues, country, gospel and Latin music. Expect to hear an array of languages and her well known ability to play ‘Frumpet’ (her name for vocal trumpet).
“Like nothing else I’ve ever heard in my life, I was just blown away with her” Cerys Matthews, BBC Radio 6
“Jazz and Folk flirt en route to New Orleans via Canterbury with Evans’ slinky, supple vocal…One slot on Later with Jools holland is all it would take” Prog Magazine
Leonie Evans has been performing since the age of 5 and has never stopped. With hundreds of collaborations with musicians from all over the world under her belt she’s created a catalogue of albums and a strong musical family.
“Leonie Evans’ distinctive vocals were magical. An astonishingly good simulated trumpet sound in her understated stride she kept the audience in her thrall.” The Bristol Post
This gig will be seated, cabaret style. Although restrictions have officially eased, we will be leaving a bit of space between tables and will send you an email a few days before with what to expect on the day (we’ll be reviewing everything at the start of September but are encouraging the wearing of face masks while moving around the building until at least the end of the summer). Our lovely Barn is naturally well ventilated!
Doors and bar open at 7pm, Concert begins at 7.30pm.
£10 per person
Please note parking for this event will be on site at the Barn, BS36 1SE
https://www.adambeattie.com/
https://www.facebook.com/adambeattieandtheconsultants
https://www.instagram.com/mradambeattie/
https://www.leoniemusic.co.uk/
https://leonieevans.bandcamp.com/
https://www.patreon.com/leonieevans 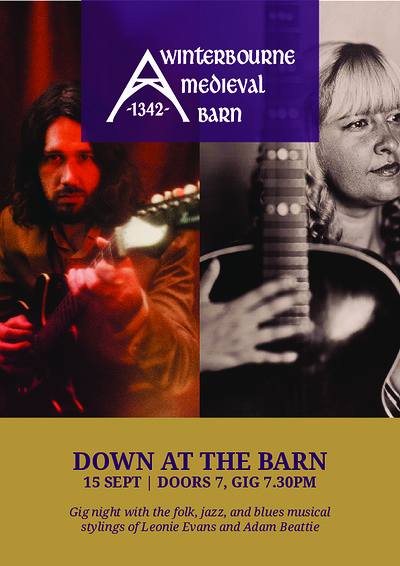