NICK HARPER is one the UK’s best kept musical secrets. Those who have witnessed the spellbinding, one-man show will tell you this. A childhood growing up surrounded by the musical prowess of some of the 60’s most revered songwriters & musicians, not to mention being son of Roy Harper, along with 20
years of crafting songs & touring the land has spawned a truly one-off, original guitarist & songwriter who stands alone as a UK great, to be cherished & revered.
An imagination bursting with ideas has seen Nick release 11 solo albums to critical acclaim, earning a Number 1 spot in the charts with the seminal hit ‘Blue Sky Thinking’.
More recently, in 2017, Nick recorded his full band album Lies! Lies! Lies! with legendary producer Tchad Blake at Studio La Fabrique, South France (studio of choice for Nick Cave, Morrissey & Radiohead).

The album received strong support from BBC 6 Music coupled with Nick & band being greeted by rapturous, capacity crowds on the tour that followed. Early 2018 saw Nick return to the live circuit with a newly formed solo set featuring quadraphonic sound & re-imaginations of songs pre-chosen, by request, by Nick’s fan base. The ‘100 Things’ tour proved to be a hugely successful return to the stage with all but a handful of shows selling out. 2018 also saw Nick Harper perform his first spoken word piece, A Wiltshire Tale, at some of UK’s most prestigious venues. It is a journey through Wiltshire’s (where Nick later grew up) history, landscape & wildlife. Depicted through the voices of three characters, this one-man show bears witness to this most magical of counties in spoken word, poetry & live music. 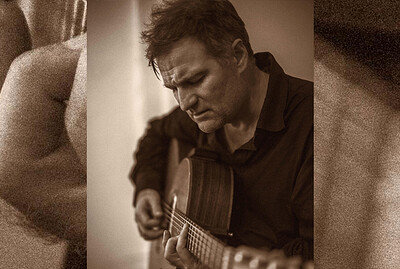