The Urban Folk Quartet presents a show of high-energy, genre-defying acoustic music that will take your breath away. Comprising Joe Broughton (fiddle, Mandolin, Guitar), Paloma Trigás (fiddle), Tom Chapman (percussion) and Dan Walsh (banjo, guitar), the award-winning UFQ celebrate their 10th birthday in 2019 and this special show will include favourites from their back catalogue as well as a host of material from their brand new studio album.

The Urban Folk Quartet, one of the most exciting and vibrant bands on the UK acoustic/ roots scene. Founded in 2009, The UFQ are a ‘folk group’ like no other. Across six albums (three studio; three live), they’ve developed a unique global sound that - though still rooted in both traditional songs and Celtic dance forms - has grown to embrace Eastern European flourishes, Middle Eastern melodies, and rhythms associated with Afrobeat, north India and Cuba. American bluegrass, funk and the occasional stray EDM reference are also audible as tunes, jigs, reels and songs spiral outwards into tightly rehearsed and improvised directions. http://www.theufq.com

“A sizzling hot ensemble who fuse folk with elements of dub, house and rock with an ease that shouldn’t naturally follow that list of genres. There's a palpable electricity to a UFQ gig that surges through the band and into the crowd.” Songlines 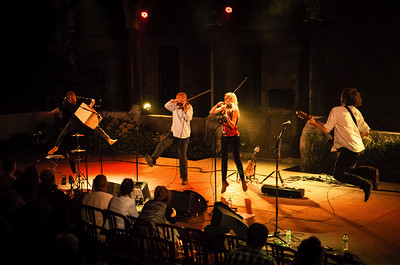