— Cosies
For the first Durkle dance of 2020, we've decided to switch things up slightly, as we welcome the Club Glow crew to Cosies
time:22:00
price: £5 entry all night

For the first Durkle Disco dance of 2020, we've decided to switch things up slightly, as we welcome the London/Sheffield/Bristol collective Club Glow to Cosies! for a one off collaborative session.

For those not familiar, Club Glow is a passion project, label and artist collective; pumped to the brim with ’90s warehouse energy and euphoria. Brought together by a love of the golden era of Rave, Hardcore and Jungle the collective is formed of Borai, Denham Audio, Mani Festo and LMajor. Club Glow is about looking back to look forward, taking influence from the sounds of the Rave era that inspired generation after generation, but moving it forward to present day. Each Club Glow release is available as individual tracks digitally, and as a continuous mix on a physical tape in the style of 90s tape packs from the likes of Fantazia and Dreamscape. This format has allowed the artists to dig deep into their influences and craft a journey that has been unique to their personalities.

Completing the line up is The Blast DJ's Georgia Bristol, and Durkle residents K Stylz & Koast, whilst hosting duties will be handled by Slowie & Juma MC as per usual. 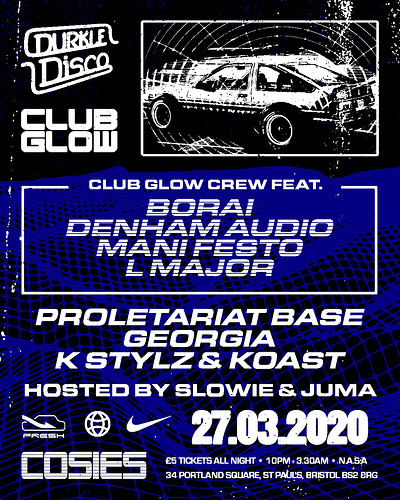