This time we will be joined by Cervo, an artist/DJ we have been keeping a close eye on for a while now! Based in Manchester, Cervo is the co-founder of Banana Hill a party very much after our own hearts; throwing musical borders out the window and drawing together genre & decade spanning sets travelling between Jazz, Disco, Afrobeat, Kwaito & Kuduro +++

Banana Hill is also a label specialising in Afrocentric sounds from artists such as XOA & Contours as well as serving as a platform for Cervo to release his own Edits. As a producer he has also released on R2 Records, Black Acre & Lumberjacks in Hell.

Holding a monthly residency on Worldwide FM he has also been making some big moves by playing gigs in far flung destinations such as Japan, Uganda, Vietnam, Singapore & the Philippines...

Joined by all the Worms...you know the deal, expect outernational bangers from all over the place to keep you moving all night long. Afrobeat, Zouk, Funk, Funana, Samba +++++

Get down early cus last time we hit capacity before midnight! Bring your best dance moves.... 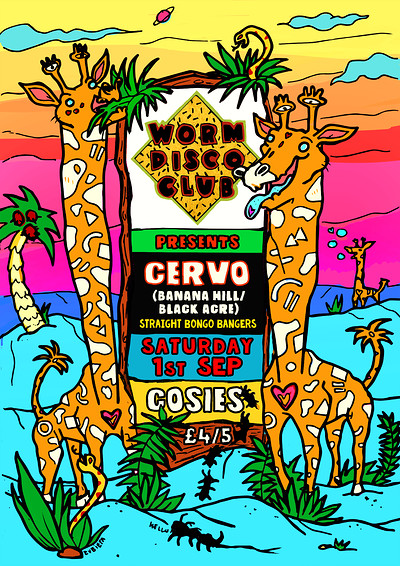