Following our last sell-out show at Cosies we thought it would be rude not to return and blow the roof off again!

This time we welcome a firm favourite of ours Last Japan. A forward thinking producer who has been lighting up the UK underground scenes for years, including crowd favourite collaborations with MCs such as AJ Tracey and KILLA P. His versatile DJ sets cover a broad spectrum of UK centric bass music, spinning everything from 2-Step Garage, Grime & Funky to 140/Dubstep.

In support we have a local favourite Pharaoh K. With releases on Roska's legendary Roska Kicks & Snares as well as DJ Champion's Formula Records he is not to be taken lightly. Expect bass ridden Funky, Garage and all things in between.

As usual you can catch the Cake residents Shamu, Dez, Bastie and Ollie G who will be keeping things moving through the night.

BED MONDAYS: BACK TO BED
This week needs no introduction! 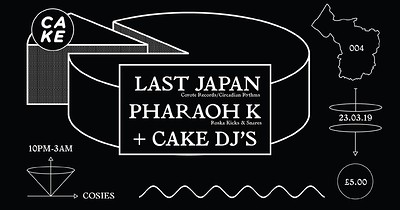