Benny ill [2 hrs]
[Horsepower Productions. / DEEP MEDi / SWAMP81 / Tempa]
Benny Ill, real name Ben Garner, is best known for being one half of seminal production duo Horsepower Productions. Labelled as “The original dubsteppers” by Blackdown, Horsepower are responsible for much of early Tempa’s catalogue, with classics like ‘Gorgon Sound‘ and ‘When You Hold Me‘ that took UK garage into much darker, dubbier terrain and ultimately paved the way for the raw styles like grime and dubstep.

Fundamental to Horsepower’s sound was their ability to build tracks using layers and layers of samples. Taking audio clips from the wall of VHS tapes inside Benny’s home, Horsepower would sample film scores, dialogue and amazonian rainforests, reconstructing sound bites to lay narrative and form the swing of their own productions.

Releasing material since 2000, the dynamic of the unit has shifted over the years. Benny however has remained at the forefront of UK bass culture, be it DJing under various guises or producing solo music for Deep Medi and Swamp81.

DJ Roy Bar [3+ hours]
[PTS]
Having been involved with PTS from it's early days (nearly 7 years now) - Roy Bar is our longest standing resident. Known for his in-depth knowledge of things things 'nuum, catch him working his way through his collection for both a two hour warm up set and hour closing set. 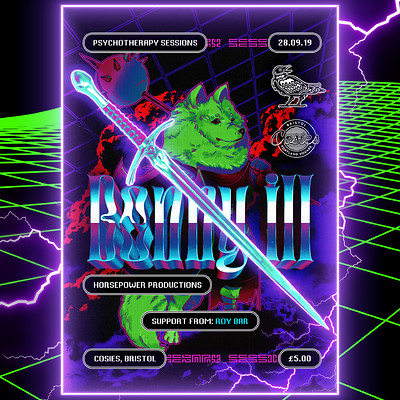