Formed out of the primordial creative ooze of the San Francisco Bay Area, Oakland’s Once & Future Band is Joel Robinow (keyboards, lead vocals), Raze Regal (guitar, vocals), Raj Ojha (drums, recording) and Eli Eckert (bass, vocals). For over a decade, Joel, Raj and Eli had worked together (in various combinations) with several bands and projects, including Drunk Horse and Howlin’ Rain. Throughout those years, they often spoke of forming an outlet into which they could combine their love of 60s and 70s psychedelic pop, jazz-rock, fusion and progressive rock, in addition to their myriad other musical fascinations.

In 2012 word finally became deed and Once & Future Band was born, taking inspiration for their name from T.H. White’s Arthurian classic. In 2014 they released the “Brain” EP on Mouth Records, drawing comparisons to ELO, Queen, Steely Dan, Yes and The Beach Boys. Not long after, they found a kindred musical comrade in Raze Regal after meeting outside an Oakland house party and soon enlisted him into the ranks.

In 2017, the band released their self-titled LP on John Dwyer’s Castle Face records, garnering rave reviews from MOJO, Uncut, Modern Drummer and Shindig among other publications and landing a spot on The Wire and The Guardian’s Best of 2017 list. Their songs have been featured on Henry Rollin’s KCRW radio program as well as the BBC Radio shows of Gideon Coe, Jon Hillcock and Marc Riley (whose show they have performed live on multiple times). They’ve made their way across the US, UK and Canada, played as main support slots onfor tours with Tool and Chris Robinson’s “As The Crow Flies” and have shared the stage with such diverse acts as Thee Oh Sees, Ty Segall, Chris Robinson Brotherhood, King Gizzard & The Lizard Wizard, White Denim, Mild High Club, King Tuff, Dungen, !!!, Battles, Foxygen, Red Fang and Metronomy. They were also personally selected by Flying Lotus and Wire to play their curated festivals.

SOME BODIES
Following on from the sultry and spaced out track Tired All the Time, Some Bodies return with the poignant ‘TV Show’ that hits harder with an aggressive, krautrock-esque riff and smoky delivery. Starting to make some waves locally in Bristol, the band have recently opened up for FUR, Trudy & The Romance, Champagne Superchillin and Sugar Candy Mountain, played Liverpool Sound City and their first London shows including one for Huw Stephens at The Social and Radio X’s George Godfrey. Upcoming shows include a So Young all dayer and Once and Future Band support tour. Supporters to date include Radio X, Bristol In Stereo, BBC Introducing and more.
https://www.some-bodies.co.uk/

ULYSSES
Praised in major publications from The Guardian to Shindig! and Classic Rock Magazine, Bath’s rock upstarts Ulysses deliver quirky pop delights and to die for big riffs with what is fast becoming Ulysses’ own distinct sound – a nether land between psych, glam and rock, guitar stroking and pop sheen.
Having toured with Rival Sons, Purson and members of The Black Crowes, and with brand new 2019 album 'On Safari' (due 21st June), again made with producer Steve Evans (Robert Plant / Siouxsie / Goldfrapp), it seems that Ulysses have unknowingly brought their cheeky influences (Syd Barrett, psych-era Stones, The Cars, Thin Lizzy, Hot Chocolate, Supergrass, Sailor, Alvin Stardust and Paul McCartney & Wings) to the heart of the new rock elite.
http://ulyssestheband.com/ 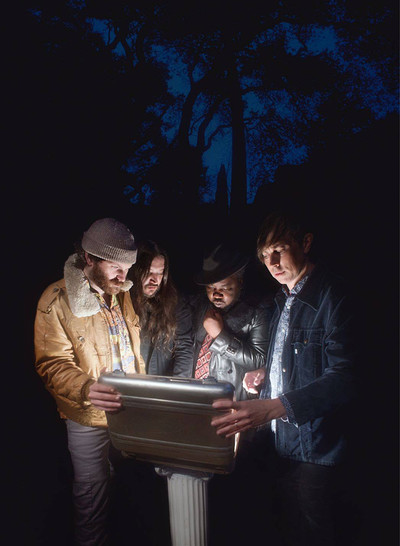 Once and Future Band