Ill Wicker are joining us from Gothenburg, Sweden. I've been wanting to book these guys again since they last played live in the UK in 2015. A 6 piece group of brilliant musicians playing beautiful prog/psych/acid folk.

” Given that their name is so self-consciously draws from what retrospective historical views have come to term Acid Folk, it’d be easy to assume that Ill Wicker must be studied, unoriginal and unduly reverent. In reality, though, nothing could be further from the truth. Whether it’s because of the relative geographical isolation of their base, their semi-communal approach to living, their youth or their roots in traditional Swedish folk music, the fact is this remarkable six-piece from Gothenburg burn with such fire and intensity that it’s almost as if they stumbled upon their own dark forest magic in a hermetically sealed universe parallel to that in which Comus and the Incredible String Band once existed – as if two people in two different places discovered electricity via two different routes. Yes, that good...Ill Wicker have a second album due out in the spring and are tearing up stages all around Europe. A band best witnessed under the cold silver light of a white winter moon.”
-Hugh Dellar, Shindig!-Magazine
"....Ill Wicker seems to prefer the beauty of darkness rather than
indulging in gloom. This contributes to the fact that they have
made one of the year's very strongest records, all categories."
-Rasmus Klockljung, LIRA Musikmagasin
“…As they walk on stage, they all look like an alliance between druid bikers and unorthodox archaeologists from a local medieval center…and it impresses from the first number how all the individual instruments' individual rhythms and rhythms weave into each other. Each member has perfect intuitive mastery of his instrument, especially in the many improvised passages, where the whole group settles against the unexplored borders - where it feels that the same unconscious supernatural force goes through all the members and leads their creative inspiration continue…I have encountered a few groups showing such an ability to draw the public's attention and consciousness into a supernatural dimension beyond our profane social reality heading out into the wilds under a starry sky as Ill Wicker does.”
-Simon Hesselager Johansen, GAFFA (DK)

For fans of The Incredible String Band/Comus/good music.

War Against Sleep is Bristol residing Duncan Fleming - acclaimed songwriter and purveyor of keyboard based psycho-ballads. War Against Sleep's music is as dark as anything Nick Cave or John Cale ever wrote, whilst all the time having a playful pop sensibility. He amassed a huge collection of deranged lo-fi recordings, the best of which resulted in two releases for Fire Records. More recent albums include 'Versus Time' and 'Eyes Of The Beast' which continue his musical war, delivering mesmerizing songs about sexual deviance, occultism, and true love.

And as if that wasn't enough, DJ Rich Hero will be spinning some appropriately psychedelic songs in between, before and probably after the bands, I would imagine. 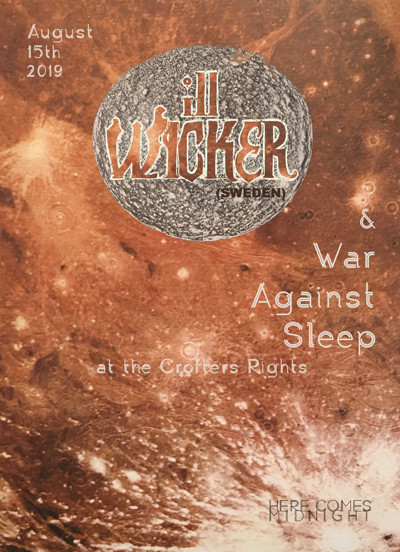