— Flour House
All the joy, none of the sorrow
price: Headfirst Tickets

The first of what could either be Bristol's longest ever running monthly comedy gig in a delightful café on a Thursday, or a disaster of hubristic proportions. But wouldn't it be fun to be there to witness it either way?

Taking place in Flour House, Magpie Comedy is a monthly night of carefully curated stand-up comedy, featuring acts who this month have appeared in the BBC New Comedy Award semi-finals, written for Mock The Week, and if I personally had to bet money, will one day be on Live At The Apollo (not a guarantee). Charly and the Flour House crew will be putting on a bespoke selection of small plates and drinks before the comedy starts, so why not come down, eat some nice food, watch some funny people for a bit, then continue on with your lives. I've never promoted a gig before. I hope this is in some way convincing. I mean, it's two quid. I promise at the very least you won't care enough to demand a refund. Thank you for listening. How have you been, anyway?

Acts for this very special inaugural night include: 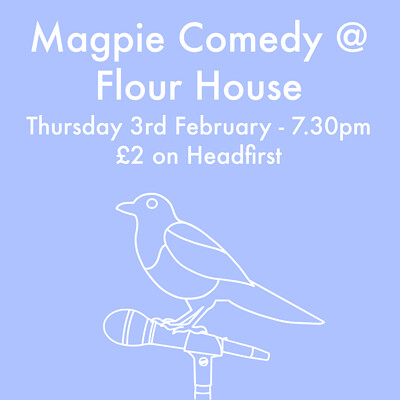