Multiverse: 50 tickets on the door!

Forecasts show it's high time for a second stellar alignment. A hole has opened in time space and through it filters a swirling vortex of deep jazz chords and distant drums. We've assembled a team of cosmic wanderers and techno time travellers to interpolate these signals and then extrapolate them across Lakota and Coroners Court for some serious mental re-formatting. Dress to sweat, lets boogie in the vacuum.

Deep space connoisseurs Chaos in the CBD and Jon Sable bring their In Dust We Trust imprint to Coroner's Court, with an extended from Chaos in the CBD. Come join us on our journey to the cosmos. DD x

In Dust We Trust Showcase:
Chaos In The CBD (Extended Set)
Jon Sable

Move D
Arguably the coolest man on earth, this all vinyl selector has been the most heavily touring DJ in House & Techno for about 20 years, and for good reason. He is the by-word for good taste (defined by his record bag as well as his penchant for red wine). Right from his early days as “Deep Space Network”, he has had a self confessed ‘obsession with the cosmos’. Step up Move D for a 3 hour tour de force in classy and irresistibly dancy tracks of wax. He is a sublimely talented DJ and its a dream to be welcoming him.

Chaos In The CBD
Next up the brothers Chaos are getting together to deliver what's always the most raucous and ravey party around. They belt in for an all night long takeover, so expect no bangers to be spared, and no t-shirts left dry. Its party time.

Secret Guest
-
A Panoramabar resident to be announced soon.

Dan Shake
The first non Detroit native to be welcomed into Moodymann’s Mahogani Music family by the man himself, Dan Shake has a battle hardened recipe for rockin dance floors. With a name like his, you have to have the wax to back it up, and this cat is one that can cooly open a warp tunnel between 1979-2019, between Brazilian Samba & Heaving Techno, without even breaking a sweat.

Secret Guest
-
A DD Favourite welcomed back to take us for a ride.

Secret Guest
-
Making waves on lables like TIEF, Lobster Theremin and more, this cats plays what you want and need.

Manami.
Resident at Hackney’s Mick's Garage, Manami was born in Tokyo and since resides in Bristol UK. We welcome her our wheels of steel for the first time, after a summer schedule that speaks volumes of her talent. 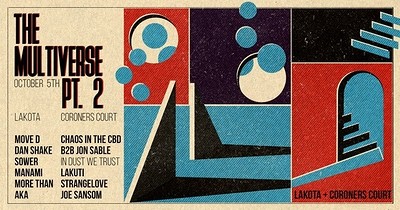