A Tribute to The Prodigy

— Lakota
A tribute to Keith Flint delivered by a selection of artist’s that represent UK Rave Music Culture & some that have been involved in Keith’s
time:22:00
price: Headfirst Tickets

Earlier this year the UK mourned the loss of one of its most iconic stars. Keith Flint’s energetic and hyperactive performances as the Prodigy’s dancer and lead singer made him one of the most charismatic and recognisable figures in British pop music. Best known for his unique horn-like hairstyle, body piercings and tattoos along with ferocious vocal delivery, it is not surprising that this man belted out some of the most influential song’s in rave music culture.

Delivering tributes for him on the night will be a selection of artist’s that represent UK Rave Music Culture, some who have also been involved in Keith’s life.

- All of The Prodigy's classic’s - Firestarter, Start The Dance, Breathe and Smack My Bitch Up as well as an array of rave tunes from the era of a jilted generation.

People are encouraged to come dressed just as Keith would have loved - on the wild side!

We will be donating a percentage of profits to a charity Keith supported - Mind. We will be giving directly to Bristol Mind. Mental health is important to us. Let's all look after each other! 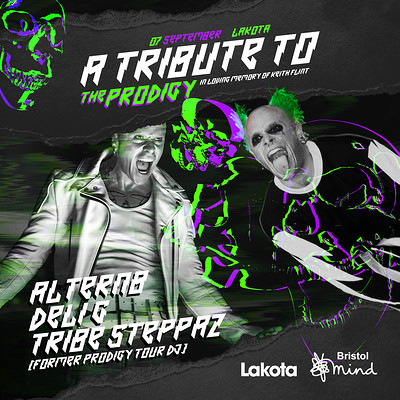