laur.ra
​Described as a “one-woman powerhouse'” by BBC Radio 1's ​Annie Mac​, lau.ra Bettinson is the real deal when it comes to unadulterated artistry. As composer, producer, vocalist and DJ, lau.ra has eschewed major label interest in order to maintain her musical vision without interference. This uncompromising approach hasn't stopped her mixing with the great and the good: as the artist FEMME she has toured the USA with Charli XCX, featuring on tracks by Sasha, Justin Martin, Four Tet and David Lynch. lau.ra is also close collaborator and vocalist in the band Ultraísta with Radiohead producer Nigel Godrich.
Under her artist name FEMME, her music has appeared in popular TV campaigns with Netflix, Made in Chelsea, Boohoo, Coors Light and most recently composed the soundtrack for an Adidas Originals China advert and music for the Pro-Evolution Soccer 2019 video game.

IRENE (Der Liebe)
Hailing from Spain, IRENE was born and grew up in Madrid, before moving to London in 2012. She sees London as one of the most influential cities in Europe for electronic music though her music has also been influenced from Madrid and her current city Bristol where she has been living since 2015.

Irene became resident DJ for Der Liebe in 2017. A night created and run by her, which has grown into a hugely respected project showcasing the very best in forward thinking artists across Bristol. Since then, IRENE has played in some of the finest clubs in Bristol such as The Island, The Crofters Rights, The Love Inn and Blue Mountain. She has recently debuted at one of the best clubs in the world, Motion, and she is due to play at the iconic club Lakota with Apex, supporting the legendary Cocoon DJ’s Pig & Dan. She has also recently performed alongside British legendary techno DJ and producer Regis as part of Der Liebe’s sister night, The Dark Side, which focuses on darker sounds of electronic music.

Luce (Noods/Sisterworks)
Often wavering away from 4/4 kick drums, Noods resident and SisterWorks affiliate Luce is best known for her ability to transition between contrasting rhythms, taking dancers on a psychoactive exploration of their senses. Growing up in France to the sound of 90s Trip-Hop and Balearic House, her influences range from Breaks, Electro, Soulful House and Acid Techno to name but a few and you can expect to hear these influences amalgamated into her performances. Recently supporting the likes of La Fleur, Desert Sound Colony, Reka, Moxie, Noire, Solid Blake & Mama Snake, this up and coming selector is one to watch in the future. 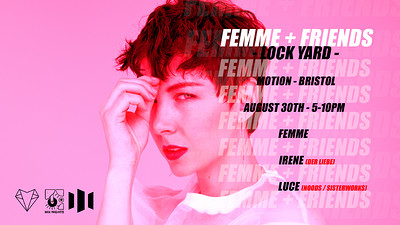