THIS IS STANDING GIG

'Dusk Brothers are a 'dark swamp blues' two-man-band from Bristol, UK.
Since 2015 brothers Graeme and Iain (E) Moncrieff have been building their trademark dark swamp blues music from the ground up.

The distinctive Dusk Brothers sound derives from self-built instruments including box guitars (one of which also functions as a bass), percussive stomp-boxes with foot operated cymbals, various percussion instruments made from anything they can get their hands on (think old oil cans, pots and pans etc) and valve guitar amplifiers built from scratch in their own workshop to their own specifications.
Combining these one-of-a-kind instruments with growling vocal harmonies and blues harp, the brothers are "cowboy-hatted shamans capable of eliciting a fierce and frenzied reaction in their listeners and are just as capable if not more so of replicating that magic live.”
(whatculture.com)

The brothers' visceral live shows continue to astound audiences and accrue a dedicated fanbase at gigs and festivals across the UK, including at the acclaimed Buckle & Boots Country Festival, their headline show at the Dark Holler roots festival, and coveted main stage appearances at Tenby Blues Festival and Upton Blues Festival.
Dusk Brothers’ featured in the BBC One documentary 'Cigar Box Blues - The Makers Of A Revolution', broadcast in 2019.

SHORT BIOG ALTERNATIVE
“We began learning guitar from the ages of 15 and 16. For over twenty years since, we have been a part of the songwriting core of several rock bands.
Late in 2014 we discovered the cigar box guitar movement: a ‘revolution' in which people build their own guitars, inspired by the makeshift instruments built from well over a hundred years ago by people who could not afford to own anything else.

Cigar box guitars range from very basic ’stick-in-a-box’ instruments, to much more refined, high quality guitars, but the ethos of building a one-of-a-kind instrument is still there at the heart of the movement. The ‘cigar box guitar revolution’ also happens to be heavily saturated with blues music, a genre both of us have always had a love for for but never played in our previous bands.
We built ourselves a couple of cigar box guitars, and having learned the basics of slide guitar, in May 2015 we got together during a family holiday to start working on a couple of songs. The raw blues sound we were beginning to make was bewitching and addictive.

Since those early rehearsals, with the subsequent creation of percussive stomp boxes, foot-operated cymbals, new and improved guitars (Graeme’s ‘Firebox' guitar now simultaneously functions as a bass) and the addition of a harmonica into the mix, we have shaped and crafted our sound one instrument at a time.” 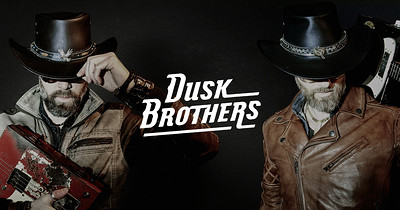