Shiny Blue Demons: Devilishly good tunes that are suitably demonic, shiny and .... er .. blue? Collaboration based around the songs of long time SongSmith favourite Tim Burroughs this time out featuring Len Liechti and QJB on guitar and bass respectively plus Tim’s long time friend and collaborator Chris Hales on keyboards. Putting the rhythm into some of Tim’s upbeat and world music songs.

Liam Jordan: Last year was an exciting year for folk-rock singer-songwriter Liam Jordan. Having released his debut album back in May 2018, Jordan also finished a full eighteen city tour of the UK & Ireland to promote the record. 2019 looks to be another exciting year for Jordan, with more UK gigs, some major festival appearances including How The Light Gets In Festival.
“A great new voice in Americana and folk music” - Tom Russel
“A true and moving songwriter” - Martin Furey
https://www.liamjordanmusic.com
https://www.facebook.com/pg/musicliamjordan
https://www.instagram.com/liamjordanmusic/
https://twitter.com/liamjordanmusic

Finola: is a 22 year-old independent, country-pop singer-songwriter from Leeds, based in Manchester. Since moving to Manchester in 2014, FINOLA has gigged both solo acoustically and with her backing band in some of the city’s best known venues including Soup Kitchen, Band On The Wall and Gorilla. Her soft country tone together with her personal songwriting creates a modern Nashville that is new, yet relatable for every listener.
<<www.youtube.com/watch?v=n_hE8GR0a7o
https://facebook.com/finolamusic
Instagram : @finolamusic
Twitter: @finolamusic 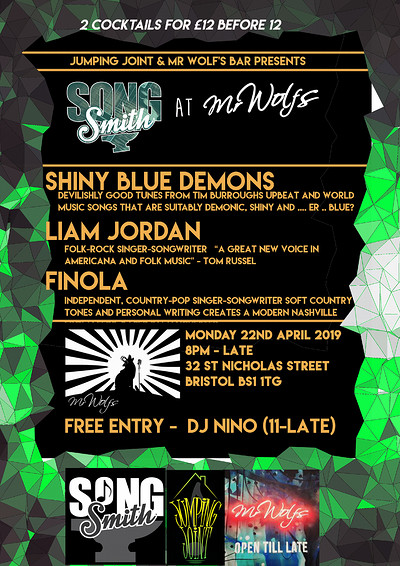