Place of Kings: Based in Bristol, Place of Kings is a four-piece band playing catchy, energetic, indie rock. Their dynamic sound fuses hooks and riffs reminiscent of the early 2000’s with a scattering of chunky classic rock guitar solos and some modern influence.
Place of Kings started the same way any true modern love story does – social media, a pint and a first dance, where the band headlined Gower Festival.
With the success of their live performances buzzing in their ears, the band locked themselves in a recording studio and after a lot of writing, noise and laughter – emerged with seven singles. Their first, Revolution, debuted on 20th August 2018.
https://www.facebook.com/placeofkings/

Eddie Mole: A singer song writer who plays both acoustic and electronic music in solo and collaborative projects.
Eddies first solo acoustic solo album Butterflies and Spiders. “The tracks are deep, moody and a little darkish some with a menacing feel to them but all telling a tale, some with a hint of ‘Dire Straits’ and ‘Pink Floyd’ pervading through them.
Then there is Eddie’s own influence which dominates and which makes this CD what it is - different and very curious, as he adds a certain quality to this CD which makes you start to wonder what is going to happen next. All in all a great CD and body of work extremely worthy of a wider audience.” Brian Inglis/Jelli Records Note.
Meanwhile band and solo work continues, both live and in the recording studio.
Influences include: JJ Cale, Neil Young, Lou Reed, Rita Lynch, Tom Waits, Alex Harvey, Hawkwind and Garbage among others.
Eddie returned to playing in 2012 after a long break. Since then he has played in and written songs for, the Bristol bands Beautiful Skin, Deep Red and his current bands Eddie and The Mind Spiders and The Angry Badgers.
Eddie’s past performances (band & solo) include: The Green Gathering, The Bristol Balloon Fiesta, The Wotton Blues Festival, Godney Gathering, Redfest and The Drunken Monkey.
https://www.facebook.com/Eddie-Mole-musiciansongwriter-378649102327932/
https://eddiemole.bandcamp.com/album/butterflies-and-spiders
https://www.youtube.com/channel/UCm7FOzyptq6bVg3ALaIcAVw
https://www.reverbnation.com/eddiemole
https://twitter.com/moleeddie

T.E. Yates: Unassuming, unusual and enigmatic, T.E. Yates is a multi-disciplinary artist of rare and disarming qualities. Most musicians boast of exploding onto their local scene in a glittering blaze of media hype and spontaneous applause. T.E. Yates, however, snuck in through an open window.
Now T.E. Yates has stepped out of the shadows, taking centre-stage with a formidable backing band (both onstage and on record) comprising members of Victorian Dad, The Bedlam Six, Ottersgear, Gorilla Riot and Honeyfeet. Even when performing solo the man doesn’t travel light, his weird and wonderful drawings regularly making an appearance between songs, baffling and delighting audiences in equal measures.
His debut EP “Possessed” was released on Debt Records in 2013. His first full LP, entitled “Silver Coins And White Feathers” and produced by Biff Roxby, was released on Debt Records in May 2017.
BBC Radio Manchester described Yates' first single as "Nick Drake's 'Hazy Jane' with a touch of Roy Orbison" and he has also received airplay on BBC Radio 6 Music courtesy of Tom Robinson. Yates' first completed animated work, Evil Cat - a faithful adaptation of Edgar Allan Poe's The Black Cat synchronised to the music of the song from my debut EP - was shortlisted for Best Music Video at the 2016 British Animation Awards. Yates' animations have also featured on major music websites including Kerrang!
Last year one of Yates' songs made the iTunes Alternative Charts Top 100 in Switzerland. He has recently opened for Trembling Bells during the tour for their acclaimed album Dungeness and also opened for John Otway, The Blockheads and Merry Hell last year. In years past, Yates has shared stages with big names and cult heroes alike, ranging from Nick Harper to Vinnie Peculiar. He even performed some of Daniel Johnston's song before the man himself at Manchester's Night & Day.
http://www.teyates.com/
https://www.facebook.com/T.E.Yates.Official
Twitter: @ teyates
Instagram @ teyates_ 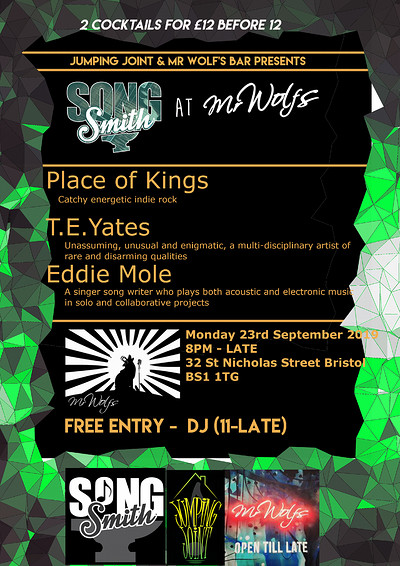