The Razzomo duo have been playing their Full Power Folk around the world for years and now present the Razzomo Band!
Violinist Lucy Razz’s fiery fiddle - and guitarist Tomo’s booming beats + sizzling shredding are now backed up by: Jack Salt’s banging beatboxing and Marcus Gee’s ballistic bass playing!
Expect Balkan/Gypsy, Celtic/Irish Folk blended with dance music, dub, rock and even touches of metal - Razzomo Band will bring their folk rave and are guaranteed to get everyone dancing in a frenzy!
Definitely something to get your knees up to!

Ninotchka are a wild & wicked folk-punk trio based in Bath, UK. The epitome of something old and something new: they mix ancient Eastern European folk dances, Irish jigs and the occasional pop-song with drop tunings and a notorious high-octane punk energy 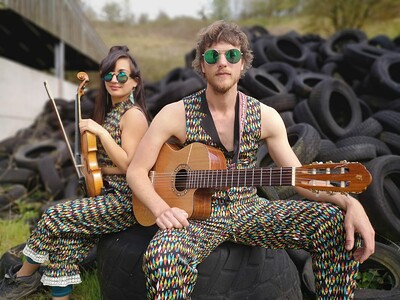