O.Love and The Affair + Badlands

O.LOVE & THE AFFAIR
6 x DJ Champion 'Asian Hawk' has had a 15 year career, and continuing loveaffair with music, with that line of thinking, its time to indulge in some of his own creations under birth name 'O.Love'.
Having releases featured on BBC, Ujima, SWU and other radio stations,'O.Love' decided to bring the music directly to the people for live shows and formed 'The Affair'.

Consisting of Daisy Russell, Theo Ellis, Keno Decosta (sounds of Harlowe),and Dan Plimmer (Dr Meaker).
Inspired by a host of influences from the likes of Prince, Stevie, Pharrell and Anderson Paak you can expect, future funk fused with R&B, Pop and neo-soul.

BADLANDS
Is a 6-Piece Funk/RnB Band based in and around Bath, U.K. We come together to craft a unique yet reminiscent new sound whilst drawing from various different musical genres, both old & new. Led by Frontman Jake Gooding. Each song is stylistically different from the last - our set is a journey and we intend to bring our audience along for the ride! Our content is based upon the trappings, misconceptions and dual-perspective narratives of modern-day dating.Inspiration taken from artists such as Silk Sonic, Jamiroquai, Sam Henshaw, Jay Prince & Anderson Paak. 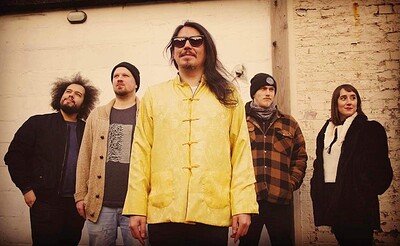