Richard Craine: 'Richard Craine's style, unique and passionate performance make this album a winner.'
Countrychart USA'
Now resident in Bristol Richard was originally from Southampton where he 'cut his teeth ', on the folk scene from around the age of 16. At Swansea University he developed his energetic style and edgy lyrics through regular appearances at The Halfpenny folk-club (a haunt of John Kirkpatrick) and the city's acoustic venues such as the uplands tavern and the chattery coffee house! He has been associated with several agents who recognise his music's ability to stretch across the generations and with these connections he has played several dates in the Manchester and Leicester (The Shed) areas, often with BBC radio interviews and live studio performances to compliment them. Currently he has branched out of purely one man shows, broadening his horizons with a selection of fine musicians from the Bristol area. Sometimes he is complimented by the talented singer/songwriter Mireille Mathlener in selected shows. In the near future he is promoting his latest recording, 'Lullabies of Dreamtime.' & is continuing to play on a national basis!
https://acemusicbookingagency.com/richard-craine-acoustic-performer-solo-musician-singer-bristol-acoustic/
https://www.facebook.com/Richard-Craine-Music-161503333882494/

Fatbwoi: burst onto the scene way back in 2008, with initial sightings clustered around the West Midlands area, it wasn't long before they were being reported nationally.
Fatbwoi's acoustic show is frenetic and hard to categorise, this sound was initially expanded into the bombastic punk-indie stylings of Fatbwoi 5. The Bwoi currently tours an acoustic show and an indie breakbeat show - with guitars, synths, loopers and all kinds of chaos going on.
What shines through is that Fatbwoi likes to have fun with his music, he hopes you do too...
www.fatbwoi.com
Facebook - facebook.com/fatbwoi
Twitter - @thefatbwoi
Instagram - @fatbwoi 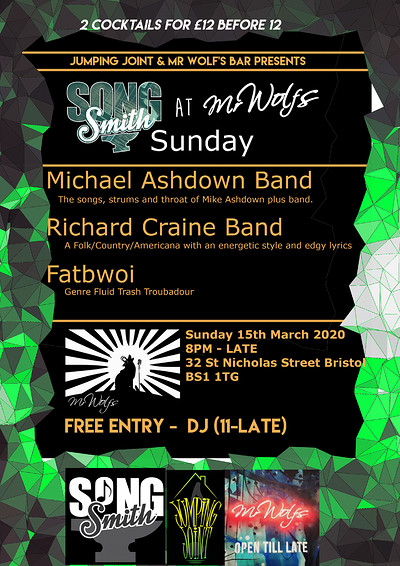