Punchcutter
I first met this band underwater when I was doing some detective work down there, and they convinced me it was actualy the world that is underwater and that we were in space and there was nothing to worry about, it seemed to make sense at the time so I booked them for this gig the band punchcutter describe themselves as:
“FFO Patricia Highsmith novels, Lieutenant Columbo, and Krautrock”

Carnivorous Plants
Has been a realy good guest in my house cuz he's been eating all my flies up, I have had a fly problem ever since I gave up karate and tried relaxing and watching youtube instead. This is why I booked this mango 4 the show as I heard strange brew also has fly problems, although I might add that carny is been joined by local legend Dan Johnson to hit the drums lots for a duration in a good way and also Jo Kelly aka Wendy Miasma will play the bass ive heard in a good way.
Carny has decribed the trio as “Multi headed Dawn metal hydra” which defo sounds like summut i wanna see and hear go listen 4 yourself and open your ears 2 this wonderfulll thing: https://carnivorousplants.bandcamp.com/

Robert Ridley-Shackleton
I am the cardboard prince. I try 2 make funky beats which ile play 4 u and ile moan and tell u about stuff thats been happenin at the cricket pavillion lately. I will do these things at the same time thanks to tech. I may also explain the fly problems and my recent underwater trip but I also might forget to do that.
have a listen at me: https://cardboardclub.bandcamp.com/album/forever-cardboard 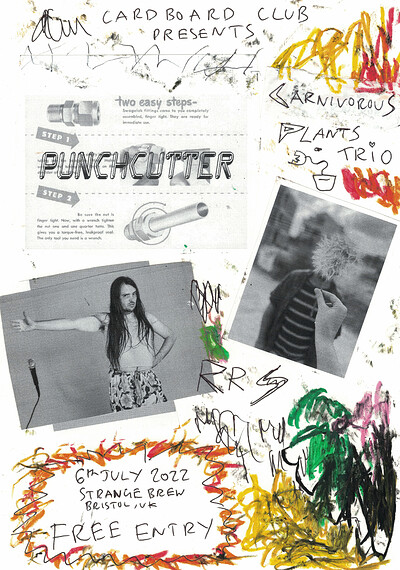