To kick off the new year, we are very excited, pleased and gassed to announce that our next party will be an All Centre label showcase. The London label run by DJ Pitch (NTS/Rinse FM) has spent the last year honing in on a left leaning club ready sound that priorities emotion, mood and a pop sensibility without relying on the established tropes of the house and techno canon.

We have joined forces bringing you a big ol line up consisting of both artists who have previously released on the label and local Bristol talent.

Co-founder of south London based party 'Overtone', while also holding down residencies on Rinse France and Balamii Radio. Expect to hear a range of low end pressure and bass-centred music as heard at the Overtone parties and in his productions released on All Centre. We can't wait to see what he brings to the table later this month!

No Future & Psychotherapy Sessions Resident, facilitator at Intervention DJ workshops and Host of All Work no Play on 1020 Radio. Join ALYA L for an exploration into the obscurities of club music ranging from downtempo alien jams all the way to high octane drum workouts.’

TT (FKA Tobago Tracks) co-founder & All Centre label boss has become known for his versatility and reluctance to conform to normality in his DJ sets, holding down residencies on NTS radio and Rinse FM with his & Gribs brain child TT. Expect hard, soft and fun bangers. He has recently seen a return to the production game years after having last released music, releasing on his own label outfit All Centre.

RED is a DJ stroke producer from Cardiff currently based in Bristol. She is becoming increasingly known for covering an array of genres in her DJ sets, taking influence from scenes both past and present. Highlighting the eclectic nature of her selection, RED hosts a 1020 radio show, which focuses on her roots in Northern Soul as well as blues and punk. 2019 has been a busy year for RED including the launch of new record label, Red Waxxx Records, running in conjunction with her event Red Room. Looking onwards, many more exciting things are to come in the new year courtesy of her recently awarded residency at Lakota.

Boiling Point co-founder, Loose Knees family member and Pressure Dome affiliate will be joining this absolute hoot of a line up on the 25th. Expect various corners of the underground to be explored shelling out a mixture of weighty & euphoric percussion led club music. 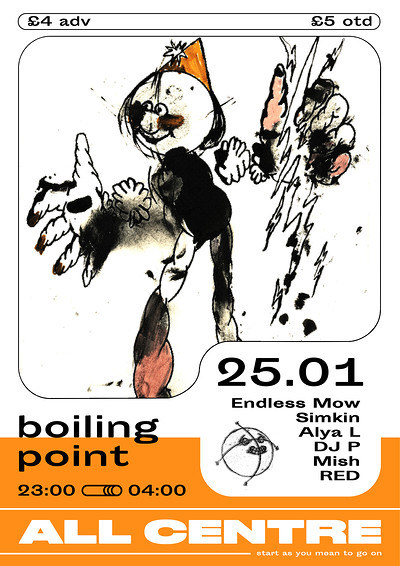