The award-winning husband and wife duo play a rare seated concert of their Americana/roots songs in an intimate theatre setting. THE ONLY SEATED FULL CONCERT IN BRISTOL THIS YEAR. TICKETS £10 advance FROM SKIDDLE.COM skiddle.com/e/13595639 (£12 on the door)

Brooding singer songwriter Elliot (Bristol songwriter of the year 2012) writes 'with a rare honesty and passion' (Anna Britten Venue Magazine) and is joined by fellow songwriter, blues and country singer Sarah (‘A vocal dynamo. A true songbird of Americana’ Bluesdoodles) ​

The couple met in 2012 and have been busy collaborating on musical projects since, including working extensively with music in mental health, addiction and dementia settings, a spin-off blues band (Coyote Blue) and a dedicated Bob Dylan covers act (The Hard Rain Band).

They both also perform as solo artists. ​ Critical acclaim for Elliot’s first couple of albums included a hand-penned letter from music journalist Alex Lee Thompson (NME) proclaiming ‘congratulations young man, this is the best collection of songs I have ever been asked to review’ ​

'A rough, gruff and tumble voice that pulls away at lyrics this good is the kind of daydream we need in England to reignite a spark for credible new songwriters. Fans of folk, poetry and rock 'n' roll should pay attention to this wholly earnest and breathtakingly awe inspiring rogue' Alex Lee Thompson - NME

​ 'Between them, Elliot and Sarah take the smoky-room, rare-steak, bourbon-laced sound of his voice and weave in the softer, country-edged sound of hers to concoct a powerful brew - one you’ll want to taste again and again. In fact, when you listen to this music be ready for its essence to linger in your head for days.' Tim Carroll - folkwords ​

'A delightful set of songs...they display a unique knack for songwriting. Elliot sounds like I imagine Leonard Cohen with his voice breaking. Sarah has a rock edge that creeps excitingly in every now and then' JK - BRISTOL 24/7 ​

'Sarah Larkham has one of the most soulful genuine heartfelt warm voices I’ve heard in a long time. Exactly the kind of singer I love to listen to. Fantastic talent' Victoria Bourne HUSKY TONES and Bristol Hippodrome Choir leader

'Beauty’s in the ear of the beholder, and it’s here in the most diverse of forms as Sarah's crystalline harmonies weave a silvery web around Elliot Hall’s rough-hewn, unaffected vocals on his songs and he fashions a gravelly baritone ballast for the soulful utterings on hers. I’m reminded of the peerless partnership of Gram Parsons and Emmylou Harris on Gram’s headliner albums of the early seventies; the contrast between his rough diamonds and her polished gems' Len Leichti - Bristol music reviewer ​

''Gloriously soulful songwriting powerhouse. Sarah Larkam sings with sensuality and power, and yes, she knows she sounds a lot like Stevie Nicks! Elliot Hall is more of a rasper with a rock and roll edge to the voice and the songwriting credentials of a long time admirer of Dylan and Cohen.' Sue Harding - Frome music journalist 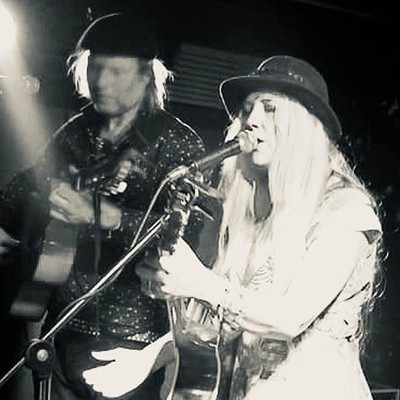