— The Cube
Guitarists Marisa Anderson and William Tyler distill deeply rooted and varied traditions into distinctive voices all their own.
price: Tickets Below

A masterclass of Americana guitar playing in the beautifully atmospheric Cube Microplex by two outstanding musicians of the genre. Having played separately MarisaAnderson with Jim White of the Dirty 3 and William Tyler with Lambchop and more recently performing the soundtrack to the film FIRST COW. However now they appear together,

Support is provided by Louie Newlands. Louie Newlands plays improvised acoustic Guitar music that, whilst heavily inspired by the American Primivitist movement, has its own distinct style which stems from a lack of formal training and 8 years drumming for free improv band Mildred Maude. He has played numerous shows around Bristol in 2022, with no two sets being the same.

Guitarists Marisa Anderson and William Tyler distill deeply rooted and varied traditions into distinctive voices all their own. Anderson and Tyler are each unyielding in their desire to extend through those traditions and the confines of “guitar music” to craft music at once intimate and expansive, conversational and transcendent. The duo’s debut collaborative album tethers together their singular voices into unified narratives that glisten, drive, and sway. On Lost Futures, Anderson and Tyler’s guitars dance through lush arrangements and pastoral duets serpentine and reverent. 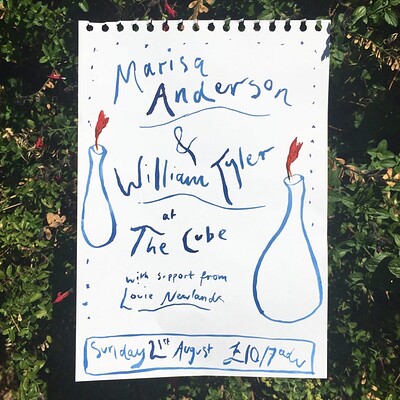