Lotus Family in conjunction with 12354.art and Small pond, are bringing some tasty electronic analogue goodness to the Cube in the form of Varsity Star (US), Inwards (UK) and Luo (UK) .

️
VARSITY STAR - nice electronic analogue sounds, giving you a friendly hug and take you gently into realms of joy.

Varsity Star is a Brooklyn-based electronic musician. Growing up in the suburbs of Boston, he played jazz through college until deciding he would be more comfortable making music by himself.

After a biblical flea infestation in his apartment, he fled to Berlin in 2017 and recorded his first full-length, Model Home, playing gigs in basements, a Danish church, and a few legitimate venues in Brooklyn. In 2022, he’s back in Brooklyn and mostly pest-free, gearing up for the release of his second album along with a slew of live audiovisual shows designed to please the ears and assault the eyes.

Inwards is the alias of Kristian Shelley, a multi-instrumentalist and music programmer from Worcestershire who draws influence from the far borders of dance music, using a modular synthesiser and other electronic/acoustic instruments to create playful yet emotionally potent tracks. For Shelley, music has always fulfilled an urgent need to communicate where words fall short, and his tracks capture fleeting snapshots of an inner world.

Released in late April, the debut album 'Diesel' introduced experimental electronic producer Inwards in emphatic style, with a cracked, psychedelia-tinged energy and colourful sonic palette. The record pricked up tastemakers' ears, including BBC 6Music's Tom Ravenscroft, Steve Lamacq, Lauren Laverne and Don Letts; BBC Introducing (for whom he performed a live session), TRAX mag, Our Culture and Electronic Sound magazine. The “When She Flashes Her Smile On Me” single was crowned BBC 6Music Recommends Track of the Week and has gained 270K Spotify streams. Including a BBC 6Music Recommends Track of the Week, a Guest Mix for Tom Ravenscroft, heavy airplay from Huw Stephens on BBC Radio 1, and a live session for BBC Introducing.

Crackling with the same sense of spontaneity as his studio productions, Inwards' absorbing live shows have seen him gaining quite a reputation, playing sets alongside Forest Swords, Lapalux, Adam Betts (Three Trapped Tigers) and Tyondai Braxton (Battles) to add to headline dates and festivals including The Great Escape, Knee Deep, Nozstock and Brighton Digital Festival.

An introspective collection of psychedelic modular synth-led experimentations, ‘Bright Serpent’ is the new album by Kristian Shelley. Electronic textures and rhythms rub up against manipulated recordings of real instruments, voices and field recordings to fashion transportive snapshots of an inner sound world.

Luo is the alias of Josh Trinnaman & Barney Sage, whose music lies on the fringes of electronic and organic.

The project has received critical acclaim from CLASH, THE LINE OF BEST FIT and more, as well as toured and performed most notably alongside Battles, Death Grips, Venetian Snares, Shigeto, Hidden Orchestra, ThreeTrapped Tigers, Mammal Hands, Emancipator Ensemble and many more.

‘Luo’s ‘Unspoken’ is what many need right now. It's an escape into a shimmering and beautifully decadent landscape brimming with organic life in the form of digitised riffs, fills, loops and sophisticated vibrancy.’ Dan Hillier, NOIZZE‘A

fusion of live instrumentation and flickering electronics, the jazz-tinged percussion is reminiscent of Flying Lotus while the arrangements often mirror the sweeping emotion of the Erased Tapes stable.’ Robin Murray, CLASH

‘The sound hovers within the realm of Battles and Three Trapped Tigers, but it is in no way a clone and offers a different experience that comes highly recommended from me.’ 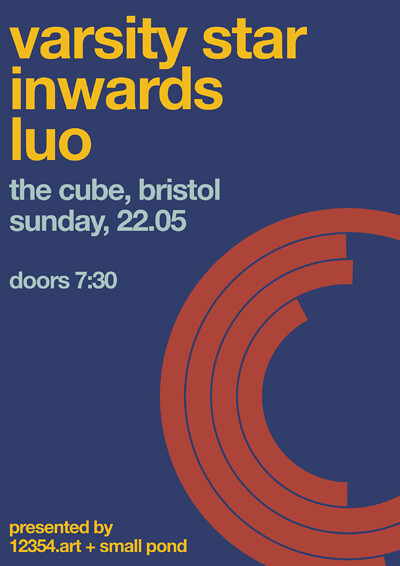