Sharon Shannon is a musician who likes to surprise. While she is known for her arrangements of traditional Irish tunes and Irish-influenced compositions, she has always been eager to explore new styles, and to meet and work with other musicians. The accordionist from Ireland has achieved legendary status throughout the world and has made the much-maligned accordion ‘cool’ in her home country. Renowned for her collaborations, not just in Irish traditional music, but through all musical genres, Hip-Hop, Cajun, Country, Reggae, Classical and Rap.

Sharon has recorded and toured with a who’s who of the Irish and Global Music Industry, including Bono, Adam Clayton, Sinead O’Connor, Jackson Browne, John Prine, Steve Earle, The RTE Concert Orchestra, The Chieftains, The Waterboys, Willie Nelson, Nigel Kennedy, Alison Krauss and Shane MacGowan – a list that is testament to Sharon’s versatility as well as talent. While crossing–over into many genres of music, Sharon’s style is uniquely traditional Irish and she has been hugely influential in promoting Irish music, not only in her own country, but in the USA where she has collaborated with John Prine and Steve Earle/ Canada with Natalie Mc Master/ Japan with the Kodo Drummers/ Malawi with Umoza Children of Mzuzu.

Sharon came from a traditional music household based in the cultural hinterland of Co Clare- an area steeped in musical tradition. Sharon’s accordion style is uniquely based on the traditional fiddle playing of Tommy Peoples. All her musical life she has spent ‘bringing the traditional music of Ireland to the world’. She has entertained US Presidents Clinton at the White House and Obama in Dublin, and Irish Presidents Robinson and MacAleese on presidential visits to Poland and Australia respectively. She recently accompanied Irish president Michael D. Higgins on his official tour of China. She has a personal relationship with the President and performed at his inauguration in Dublin Castle.

The genre-defying star has achieved multi-platinum album sales and has had several number chart topping albums, singles and DVDs in her home country. Her album Galway Girl went 4 times platinum in Ireland with the title track winning her the Meteor award two years running for the most downloaded song. She also celebrates being the youngest ever recipient of the Meteor Lifetime Achievement Award.


In 2015, Sharon received an IBAM Award in Chicago for her ‘unique contribution to Irish Music’ Other recipients were Darina Allen and actor Liam Neeson.
Sharon’s talents have even made their way into the world of film with her music featuring in several Hollywood movies and playing a cameo role in the Neil Jordan movie ‘Ondine’. She also worked on a stage production of JM Synge’s ‘The Playboy of the Western World,’ directed by Jim Sheridan.

A prolific composer, Sharon continues to defy genres and in 2012 released an album of original Irish music recorded with the RTE Concert Orchestra called Flying Circus. This is again a milestone, in that she is the first Irish artiste to have composed and recorded an album of original and newly composed Irish traditional music with a full Concert Orchestra. This release was followed by an intimate, live collaboration with Alan Connor, In Galway, recorded at O’Connor’s pub. It wasn’t until her 2017 release, Sacred Earth, did we see Sharon’s truly eccentric genius in this varied collection of African and Reggae sounds, fused with traditional Irish music.

Sharon’s list of collaborators is as extensive as her musical repertoire. In 2013, Sharon co-wrote an album for the High Kings, she is also a frequent collaborator with legendary musician Donal Lunny and, in 2018, even released a collaborative album with Leinster and Ireland rugby star, Robbie Henshaw. The Secret Sessions was recorded alongside Henshaw and his family and was released in aid of South Westmeath Hospice.

Sharon regularly performs on tour and at festivals in Ireland, UK, France, Belgium, Holland, Spain, China, Australia, New Zealand and North America. In the latter half of 2019, Sharon toured extensively across Japan, Europe and the UK.

During the lockdown period, Sharon achieved viral status when she received a Facebook Challenge from Robbie Henshaw to learn a new skill. After five days of intense practice, the viral ‘Jolly Roger’ Facebook video was born. Sharon subsequently recorded The Jolly Roger as part of an album The Reckoning which as released in November 2020.The Reckoning is an amalgamation of cultures and musical influences to create one of Sharon’s most unique and original albums to date.

Sharon is a passionate animal lover and does a lot of voluntary work and fundraising for various animal rescues and is a patron of Madra (Mutts Anonymous Dog Rescue and Adoption) based in Co Galway.

Sharon supports many other charities and is an ambassador for Missionvale Ireland which provides support to relieve poverty and provide education Missionvale township in south Africa. Sharon released the album, A Thing Called Love: Songs For Leo, in aid of Galway charity Rosabel’s Room, of which Sharon is an ambassador.

In recent times, Sharon has expanded her work beyond her music, recording and uploading Podcasts regularly to her Patreon page to offer fans a deeper understanding of her music. In conjunction with the NUIG Music Department, Sharon recorded a masterclass series which is used as part of the NUIG Music Degree. These will be made available online with new lessons uploaded on an ongoing basis.

Sharon released a a double live album in July 2021. Recorded in February 2020 and featuring longtime sidemen Jim Murray and Jack Maher on acoustic guitars and vocals, Live at De Barras showcases the talent and power of the Sharon Shannon Trio. 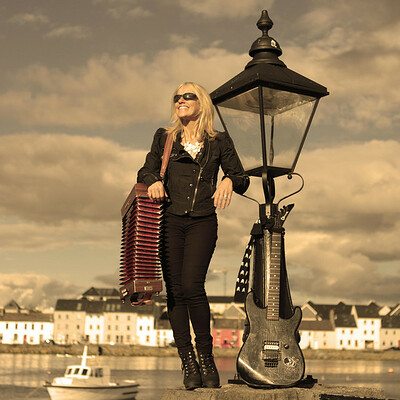