Gracing the stage at The Gallimaufry for the first time, King Heron are bringing their groove and improv-based guitar trio sound in celebration of the launch of their upcoming EP - 'TROIKA EP'.
This promises to be special night of new music. Expect nods towards John Scofield, Julian Lage, Wayne Krantz and Forq.

Bristol fusion trio King Heron was created from the union of three different and distinct musical personalities. With improvisation, groove and a modern jazz mentality, they meld disparate influences into a style that is all their own.

Welsh guitarist, composer and arranger Gareth Rees hails from a small village in the Brecon Beacons. Growing up in one of the most beautiful parts of the world has resulted in a strong connection to the land, a connection that he shows through his arrangements of Welsh traditional melodies for solo fingerstyle guitar. Drawing influence from the likes of Tony McManus, Pierre Bensusan and Ben Walker, his mesmerising arrangements paint a hazy picture of Welsh landscapes and legends. 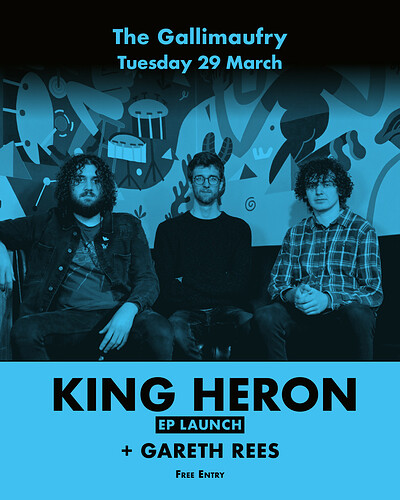