"Quite simply one of the best live albums ever recorded" - BBC

The electric spontaneity captured on Donny Hathaway's 1972 "Live" album has proved a major influence to countless musicians. Just a mere mention of the album usually produces a wistful dreaminess to those that know it, have treasured it and played it over and over, savouring every second of this amazing collection of songs. To play tribute to this album, Billy Weir has assembled a group, hand picked from some of Bristol's grooviest bands. The aim, not for a note-for-note recreation of the album, but instead a recreation of the energy and feeling of being in the room with Donny's incredible live band.

Billy Weir, himself drummer of Bristol funksters The LBJBs, will be joined by Chris Jones (We Are Leif) on bass, Jon Clark (The Pocket Sessions) on percussion and David Ferris (Three Step Manoeuvre) on Hammond Organ/Keyboards. 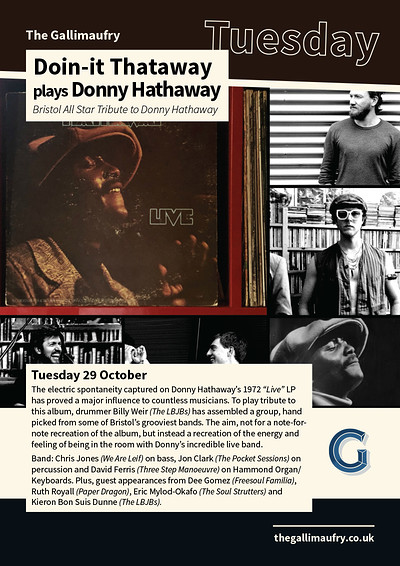