Released in 2012, their first studio album ‘Stars Reach The Abyss’, mastered by Jon Astley, brought the band on tour in England and Italy. The song "Meltdown Corp." was included in the annual compilation 'The Reverb Conspiracy', co-released by Fuzz Club and The Reverberation Appreciation Society (Levitation Austin). In 2015 their second studio album ‘As Medicine’, mixed by John Wills of Loop, was released through Picture In My Ear and Fuzz Club and distributed by The Committee To Keep Music Evil too. In the next two years the band toured Europe three times, also performing at the Secret Garden Party and Liverpool Psych Fest. Their third album ‘Bleeding Magenta’ was released in 2017 by Fuzz Club and repressed in the US by Little Cloud Records, followed by its European promotional tour and a performance at SpaceFest in Gdańsk. In 2018 they toured Australia, headlining both Sydney and Melbourne Psych Fest and performing at the Adelaide Fringe. Next the band went on a US-Mexico tour and recorded a KEXP live session. In 2019 they completed a back to back tour of 50 shows in Europe, the US and Canada including Desert Stars Festival in Joshua Tree, Milwaukee Psych Fest, The Echo in LA, Hotel Vegas in Austin and Mercury Lounge in New York. A third European tour took place in September, including Levitation France and shows with The Warlocks and The Dandy Warhols and in January 2020 they played the Balkans for the first time. Some of their songs are featured on episodes of Showtime Networks original TV series "Shameless".

On March 16th 2021, New Candys released the first lead single "Twin Mime" with a music video which premiered on Post-Punk.com and the song ultimately featured on five Spotify editorial playlists, including "All New Rock". This was followed by the second single "Begin Again" on April 13th, 2021. The music video, directed by Ivana Smudja, premiered on CVLT Nation and the song was featured on the "Sacred Bones Now Playing'' playlist curated by the renowned record label. The third and final single "Zyko" was released on May 11th, 2021 and was added to six Spotify editorial playlists including "New Alt-Rock Mixtape", Apple Music’s "New in Rock" and Deezer’s "Hot New Rock", making it their most successful track to date. The song was broadcasted on BBC Radio 6 Music during Iggy Pop’s The Confidential Show hosted by Tom Robinson and on May 14th the band performed for the online edition of The Great Escape Festival.

'Vyvyd' was released on June 4th, 2021 accompanied by two music visualizers for "Factice" and “Evil Evil” and an interview for Beat Magazine. The song “Vyvyan Rising” was added to three Spotify editorial playlists including "Modern Psychedelia". Under the Radar's Haydon Spenceley wrote that the album "takes the best of psych and shoegaze, adds an effective strain of driving originality and songwriting chops, and dresses it up in a satisfying intensity." KEXP's Music Director Don Yates declared Vyvyd to be “a solid set of shoegazer psych-rock with fuzzy guitars, atmospheric synths, heavy rhythms, detached vocals and hypnotic song hooks” whilst DJ John Richards said fans of Black Rebel Motorcycle Club, Ride or The Jesus & Mary Chain will love the album.

The band announced more than 50 shows in support of the album, between Europe and the UK, set to take place from July 2021 to February 2022, including shows with The Dandy Warhols.

Flying Moon In Space are a six-piece band from Leipzig, Germany borne out of live improvisations which are known to last hours at a time. Having clocked-up nearly fifty shows in their home-city alone, as well as support slots with The Holydrug Couple, Elephant Stone and The Sweet Release of Death and a couple of headline tours around Europe, the group have now signed to London-based label Fuzz Club for their self-titled debut LP. A shape-shifting blend of driving Krautrock aesthetics, vivid psychedelic pop and techno-indebted electronics, FlyingMoon In Space’s ambitious first full-length. Although they cite influences that span the likes of Can, Neu!, Brian Eno and Godspeed You! Black Emperor, ‘Flying Moon In Space’ is an album indebted to the band’s own experimental live approach more than anything else. Their improvised live shows typically see them perform with four guitars, bass, drums and vocals, resulting in huge walls of sound that are awash with hypnotic motorik beats and orchestral walls of reverb. Talking about the album, they say: “We gain our main influences during experimenting live with different rhythms, layers of sounds and other textures. The energy that comes up playing live with that amount of people takes our perception of music to another dimension. We developed the whole album during our live shows in 2019 so they really capture a certain moment for the band.” It is unsurprising, then, that the free-wheeling approach that Flying Moon In Spaceapplies to their growingly-notorious live performances has resulted in a record that charts numerous musical sensibilities and moods 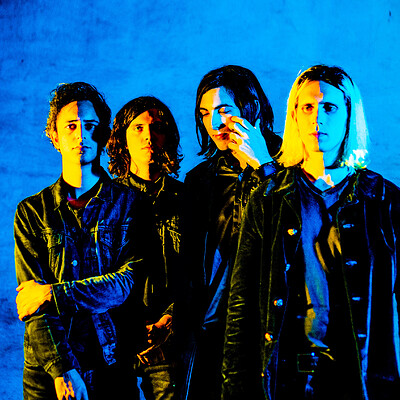