18+ event.
--
Joining forces with legendary producer John Fryer (Cocteau Twins, Depeche Mode, Swans, Wire), the new album "Blue Sky/ Grey Heaven" is the follow-up to the home-recorded debut "Lost in the Vortex" (2017), which was called "Hauntingly Beautiful" by New Noise Magazine, and "kind of like
grunge run through a kaleidoscopic filter with a bit of noise peppered in" by The East Bay Express. The new album promises equally eclectic reviews with tracks ranging from from the fragile noise pop of "Soft Inside" to the fuzzed out shoegaze of "False Positive".

Since forming in 2015 in Oakland CA, The Acharis has been a creative outlet for musical and life partners Shaun Wagner and Mila Puccini. After being heavily involved in the music/art/freak scene of the San Francisco Bay Area for years, they decided to create something all their own, trading off vocals and songwriting duties as well as performing every instrument heard on the recordings. Most recently the pair moved to San Francisco and are rehearsing with a four piece live band, which promises to deliver their most powerful performances yet. They have toured many times in the US and in Europe, along the way sharing the stage with La Luz, Cindy Lee, The Shivas, Le Corbeau, Dead Meadow, and Naomi Punk to name a few.

Blue Sky/ Grey Heaven is scheduled for release in 2021 by Cranes Records in Paris, France (Spirit of the Beehive, The December Sound) in partnership with Coypu Records in Italy (A place to Bury Strangers, Algiers), and Goth Horse Records in Oakland, CA 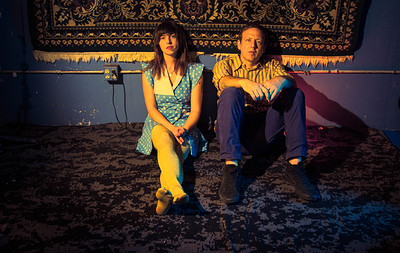