“In a post-modern society where logic is generally valued over spirituality, music is one of those mysteries that slipped through the cracks.”

It’s this kind of philosophical approach to life that has in large part influenced London-based international acid rockers SWEDISH DEATH CANDY’s forthcoming second album Are You Nervous?. Like so many young people in 2019, the members of Swedish Death Candy find themselves living in a state of uncertainty—not just in reference to the obvious current political unrest in the UK. “Environmental issues, technological advances…it feels like we’re on the brink of massive change,” says vocalist / guitarist Louis Perry, “so ‘Are You Nervous?’ felt like an appropriate title. I’m a big sci-fi fan, and the best science fiction is generally a social commentary based in a futuristic universe. I feel like we’re living in that time. We aren’t far from the future that a lot of the classic sci-fi novels refer to.”

Completed by guitarist Francesco Codardo, bassist Jiwoon Whang, and drummer Marco Ninni, the band were able to spend much more time considering individual sounds and how they fit within the sonic spectrum on the new album, hand-selecting the perfect tone for each moment. “To use a painting metaphor,” says Perry, “it felt like each brush stroke and colour combination was considered, as opposed to the first record, which was more like a photograph in that it was an attempt to capture the energy of a moment.” Recorded with Tobin Jones and assistant engineer Lucas Mendez at The Park Studios in Wembley, it’s a deeper delve into the band’s sprawling cultural influences than they’ve ever committed to tape before.

With their self-titled debut album very much a live record that was written and recorded through jam sessions, the band re-focused on their songwriting craft for album two, bringing fully formed tracks to the studio and working intensively on arrangements. As a result, AYN? is a more concise and considered injection of SDC’s influences than ever before. Whilst retaining their core psych-sound, there’s a heaviness to SDC that seems latent within the band; gut-twisting, rolling riffs, dripping in distortion, ooze naturally from their skin.

The band’s international makeup is itself a reflection of everything positive about modern multicultural society—an exchange of culture and influences merging and mingling to create something new and utterly unexpected. “Jiwoon definitely opened my eyes to Korean music,” enthuses Perry on this aspect of their creativity. “I’ve been really digging this folktronica artist called Mind-Air Thief,” he continues, an influence that becomes evident on the experimental nature of album tracks like ‘Space Holiday’—an almost completely electronic departure that breaks new ground for the quartet.

As a result of these myriad influences and experiences, the record as a whole is a stark juxtaposition of the confusing tangle of emotions that modern society foists on us all, as Perry explains: “It’s not all doom and gloom; although fear and anxiety are strong concepts throughout the record, it’s also about optimism and embracing the positive aspects of the time we live in.” Tracks like ‘Modern Child’—about an orphaned child born in the future to robot carers—weave Perry’s disparate cultural influences together perfectly, and taking a creative approach to the storytelling on the record allowed him to examine topics from multiple perspectives.

“There’s an aspect of escapism in our music, so it’s important for us that the lyrics be somewhat ambiguous,” says Perry when he considers giving too much away. “The message is there if you want it, but you can just chill out and enjoy the tunes if you prefer.” And for those of us that are looking for that message, that profound insight experienced through the lens of SDC’s music? “One person’s truth is another person’s lie,” he rounds off, sagely. “As individuals we strive to understand our version of the truth, but it’s only relative to our environment. It’s important that we respect each other’s version of the truth.”

‘Are You Nervous?’ is due for release on September 27th via Hasle Records. 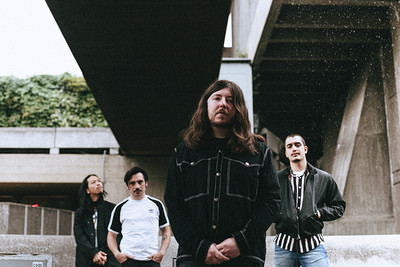